The Alexander Nevsky Monastery complex is the most sacred religious sanctuary in Saint Petersburg housing the oldest buildings in the city and graveyards of famous Russians cultural figures.

Prince Alexander Nevsky is one of Russia's most celebrated leaders for his victorious defeat of the Swedes during Russia's Northern War. Upon founding St. Petersburg, Peter the Great  honored him by commissioning Italian architect Domenico Trezzini to build a church near the site of that victory, so in April 1713,  Alexander Nevsky Monastery was established.

Deemed a saint by the Russian Orthodox Church, Nevsky's remains were transferred from the ancient city of Vladimir to the monastery and the day of their arrival is still a national holiday. In 1750, Empress Elizabeth ordered a shrine to be built out of 1 ½ ton of silver and engraved with symbols of victory for his remains and in 1797, Nevsky was given the highest honor in the orthodox hierarchy by Emperor Paul when the church was renamed Alexander Nevsky Monastery of the Holy Spirit.

By the 20th century, the monastery became the center of a complex of sixteen different churches, but with the onset of the Bolshevik Revolution in 1917 and the impact of Soviet rule, many of them were closed, used for soviet purposes or destroyed. In January 1918, the Bolshevik's tried to seize the monastery and its valuables, but they were thwarted by the ringing of the monastery bells and the fierce determination of local parishioners to protect it.

a look inside the alexander nevsky monastery

More About the Monastery

more about the monastery

The Alexander Nevsky Lavra religious complex is a monastery located in the surroundings of St. Peterburg on the opposite side of Nevsky Prospekt. A tour inside the place can take you through the Necropolises of Artists and the Annunciation Church and the Trinity Cathedral, which were built at the beginning of 18th-Century, only a few years after the foundation of the city.

The monastery's four cemeteries, also known as the Necropolises of Artists, are an important part of this historical site far from the tourist crowds. The Tikhvin Cemetery, Lazarus Cemetery, Nikolskoe Cemetery, and Kazachoe Cemetery are burial grounds for many of Russia's famous writers, architects, and composers.

Here, one can view the final resting place of Tchaikovsky, Dostoevsky, Glinka, Rubinstein, Rossi, Mussorgsky, Lomonosov, Krylov, Rimsky-Korsakov, Starov, Quarenghi and many others who have shaped Russian history. The silver sarcophagus of Alexander Nevsky, however, was removed during Soviet times and is currently located at the State Hermitage Museum.

Generally speaking, visitors say time spent at the Alexander Nevsky Monastery is nothing short of tranquil. Strolling in peaceful gardens and attending a late Saturday mass when the ringing of the bells sound the call to worship, they say the beautiful Gregorian chant and priests in full Orthodox regalia is truly idyllic and serene.

The largest building in the monastery is the Trinity Cathedral (over 60metres high), which was constructed in 1776-90 by Ivan Starov.

The Annunciation Church was founded in 1720, and, until Nicholas I's reign, intended for junior members of the House of Romanov.

The Kazache (Cossack) Cemetery is one of the smallest cemetery in the city. Founded 1917, it was originally named the Communist Cemetery because it was the burial site of the Cossacks, Bolshevik demonstrators, and other heroes of the Russian Civil War.

You might also find interesting to know that A Lavra (from the Greek laura - street) is an Orthodox monastery of higher status: in the Russian Empire there were four lavras - the Kiev Monastery of the Caves (from 1598), the Trinity-St Sergius (1744), Alexander Nevsky Monastery (1797), and Pochayevo Dormition (1833). For your information, all the monasteries are subordinated directly to the Patriarch.

There is no entry fee to visit the Alexander Nevsky Monastery and its churches, but there is a small admission fee, which is very affordable to enter the cemeteries and view the graves of many of Russia's famous writers, composers, and architects.

Located right next to the Alexander Nevsky Metro Station – easy stop off the green line of the subway. Less than a 10-minute walk from the metro to the monastery.

Our picking list of Hotels nearby Alexander Nevsky Monastery 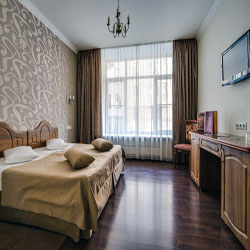 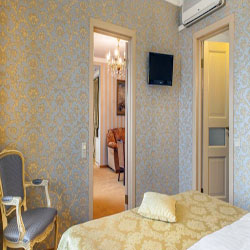 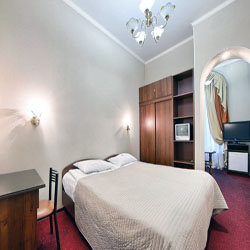