St Petersburg public transportation
learn how to get around the city

Find out how St Petersburg public transportation works. There are a variety of transport options to get around Russia's Northern Capital. Here we cover all of them!

The city of St Petersburg has a huge and efficient public transport system, which can get you everywhere you want to go. All forms of transport work from 6 am to just after midnight and they all are reliable and cheap with a nice vintage touch. 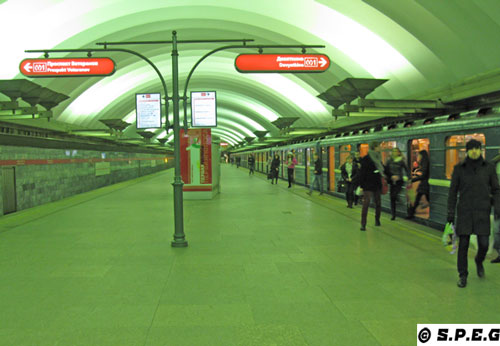 St Petersburg public transportation options include the Metro (faster, convenient, and beautiful); the Bus (efficient but crowded); the Trolleybus or the Tram (efficient, slow, and old fashioned), the popular Marshrutka (faster and efficient but not recommended if you don't know the Russian language), or the Taxi (comfortable and inexpensive by European standards).

In addition to the above transports, you can also rent an official bike if you like cycling (nowadays there are many rental bicycles to go in the city like those you see in the main European cities); or you can catch a yellow boat, a sort of water taxi that will bring you from one island of the city to another, similar to the river cruise boats, but smaller in size and certainly not suitable for St Petersburg sightseeing.

Among all the transport options the fastest and most efficient way to get around the imperial city is the Subway. Saint Petersburg's Metro is one of the deepest in the world and one of the most beautiful.

If you're thinking to rent a bike or take a water taxi keep in mind that these two transport options can be fun to try but not ideal for getting around the city. Besides the water taxi run only during summer and going on a bike in the heart of the city is not easy because of traffic jams, many walking people on the sidewalk, and a few bike lanes.

That said, the majority of Petersburg residents get around the city using the Metro and the Marshrutka. For tourists, so for you too, the best option would be taking the Subway because most of the tourist information and signs are in the English language.

If you're planning to visit the city of Peter the Great, you'll like how cheap and convenient getting around here can be. To help you get around our beautiful city we have summarized all the information you need to know about each form of St Petersburg public transportation. To get started, just click on one of the travel options below.

GETting  AROUND the city BY METRO

The Metro is one of the most popular St Petersburg public transportation. It has five color-coded, numbered metro lines and is extremely deep and beautiful, but not as extensive or extravagant as Moscow's Metro. The subway was built by nearly free peasant labor in the 1930s and - after a break for World War II - finished in the 1950s. Definitely this is the best choice to travel around Saint Petersburg and a must-see for first-time visitors.

GETting AROUND the city BY BUS

The bus network in Saint Petersburg is cheap and very extensive, but not particularly easy for foreigners to use if they cannot understand Cyrillic. There are different types of buses you can take and all bus stops are marked by signs with the letter "A", which stands for avtobus. The bus can be very busy during the early morning and late afternoon.

GETting  AROUND the city BY TRAM

Locals call St. Petersburg the "City of Trams" because it has more trams than any other city in the world. The system of trams works pretty well here but is less extensive than the bus or trolleybus, and sometimes services can easily be disrupted by roadworks. Tram stops are marked with signs above the tracks (with a letter "T" on them), which stands for Tram.

GETting  AROUND the city BY TROLLEYBUS

Almost identical from buses (although much more environmentally friendly), trolleybuses have an extensive network like the bus and the tram. It's another efficient way to travel around St. Petersburg but isn't a quick option. Also, the trolleybus can be very crowded during the early morning and late afternoon, plus, currently, there is no information in the English language on board.

GETting AROUND the city BY BIKE

Saint Petersburg is still not a bike-friendly city even if they want you to believe the opposite.  However, the city is flat so getting around the city by bike is possible but you must be careful at cars and holes. Russian drivers are known to be careless and driving fast, and the streets may have holes, depending on which area you go to. To get around the city safely is better using the St Petersburg public transportation.

GETting  AROUND THE CITY BY TAXI

Nowadays getting around the city by taxi is very easy even if you don't speak the Russian language, though knowing a few words can be very helpful. To get a taxi, you can ask your hotel or book one in advance on the internet through Uber or Yandex. The old good times when you were able to flag down a car to take you home are gone. Today every Russian driver is working with Uber and Yandex.

GETting  AROUND THE CITY BY MARSHRUTKA

The Marshrutka is basically a private minibus running on a fixed route throughout the city. After the Metro, this is the most popular St Petersburg public transportation because they are fast, cheap, on time, and particularly useful for getting to the suburbs, and anywhere in and out of the city. Definitely a great option for locals, but not really for foreigners unless the Russian language can be understood.

GETting AROUND THE CITY BY WATER TRANSPORT

Saint Petersburg is a city built on several islands and because of that the St Petersburg public transportation now includes also Water Transports, which are called yellow taxi boats. Known as Aquabus, these yellow taxi boats are only popular among Petersburg residents living on the islands. They are inexpensive and offer three routes through the city and one out to the island of Kronshtadt.