The Saint Petersburg Metro is not only the best and most efficient way to get around our beautiful city, but it's also a remarkable work of Russian architecture that is worth experiencing.

St. Petersburg's Metro is one of the deepest in the world (105 meters below ground) and one of the most beautiful (second only to that in Moscow). Opened on November 15, 1955, the subway is considered the 12th busiest metro system in the world. 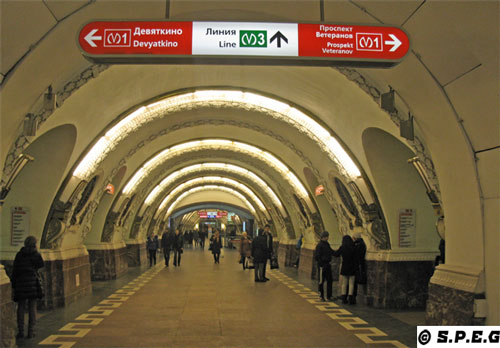 St. Petersburg's subway system - locally we call it the "M" - is the easiest and cheapest way to get around the city, aside from walking. It has five lines, 72 stations, 3,500 trains and about 3 million passengers each day, and is served by a staff of 13,000 people.

As you can imagine many Petersburg residents are using the subway so trains can get easily crowded during peak time. However, that should not stop you from using it because you won't need to wait more than three minutes for a ride. And, most importantly, the Saint Petersburg Metro is an open museum worth visiting.

For this reason, we recommend booking a tour of the Metro!☺

Almost each metro station is a magnificent work of art designed by some of the country’s best architects. So, when you get off the train, don't be surprised to see beautiful statues, mosaics, and golden carvings. Each metro station has its own decoration and meaningful story to tell. Some are dedicated to the Bolshevik Revolution and the Soviet era, others to great Russian famous writers such as Pushkin and Dostoyevsky, while many are dedicated to the victory of Russia in WWII.

Nowadays, these subterranean palaces continue to rise year after year to complement the awesome buildings of the city, preserve Russian art, and bring to life the culture and personality of the entire country.

all you need to know
about the saint PETERSBURG metro

Thinking of taking the subway? No problem. It's easy, exciting, and safe. Below you can find all the information you need to know about the Saint Petersburg Metro. To get started just click on a topic below to fast-track to that section.

There are many reasons you should use the subway.

Firstly, you can easily reach most tourist attractions. Secondly, you can move across each island of the city faster and experience vertiginous views from the top of the escalator. Thirdly, you can enjoy a huge dedicated work of Russian art and get a glimpse of the daily life of many Russian People.

Of course, you can also be getting around the city by taking the bus, tram, or the trolleybus, allowing you to take in the architecture of the city at a slow pace, but as we said the subway is faster and efficient, and most importantly, is an attraction itself for anyone visiting the city of Peter the Great.☺

Keep in mind that without a stop at the Russian subway, your trip to St Petersburg won't be complete.

The Saint Petersburg Metro entrances are marked with a blue letter "M" on top. It has five colour-coded (red, yellow, blue, green, violet) and numbered metro lines (M1, M2, M3, M4, M5) with a total length of 124 kilometres. In order to change lines, you usually need to change stations. 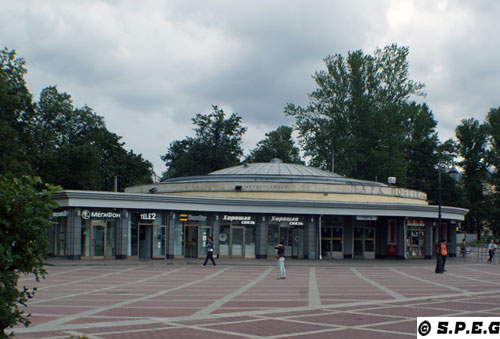 There are a few transfer points and underground passageways linking adjacent stations like Sadovaya or Sennaya Pl. and Nevsky Prospekt or Gostiny Dvor. When you arrive at a station, it can be difficult to see the name of where you are. You will hear the arrival station announced, followed by the name of the next stop.

You should also know that some platforms are enclosed and resemble a long hall full of elevator like doors. So, you can't see the train as it approaches, but you can hear it and suddenly the doors will open – on the other side of the doors you will find a train to board!

The trains run quite frequently (every 2-3 min) and are always punctual. During rush hours the Metro can get crowded, so it is better to avoid travelling during these times if you want to avoid pushing, shoving, and queue-cutting.

Lastly, the map of Saint Petersburg Metro, all tourist information, and metro signs are now in English and no longer in Cyrillic like it was before. This change makes it easier to take the subway if you don't speak the Russian language.☺

HOW TO PAY AND GET IN

To take the subway you'll have to use tokens (Zheton) which can be bought from the ticket windows (Labeled Kacca) upstairs at each Russian metro station. Currently, a token costs 55 Rubles (less than one dollar) and let you travel anywhere in the city until you get out. 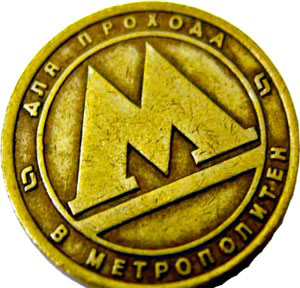 To get to the metro cars, you will have to insert your token into the appropriate slot to the right, go through the barrier, and then, go down the escalator. You will find also vending machines of two types in nearly all metro stations.

The old orange machines will allow you only to insert a set denomination of note (currently 100 Rubles) and obtain a set number of tokens plus change. If no light is showing, the machine is not working.

The old orange machines will allow you only to insert a set denomination of note (currently 100 Rubles) and obtain a set number of tokens plus change. If no light is showing, the machine is not working.

The second kind of machine is computerized with a touch screen and will allow you to choose the number of tokens you require, pay with different denominations of note or coin, and also to buy or top off cards.

For your information, a really good way to save time and money is to buy a magnetic card or electronic pass for as many rides as you want (10/20/25/40/50/70 units), or simply use a one month-metro pass, if you wish to stay longer. For example, you can get a card for 10 rides that can be used in seven days for the price of 400 Rubles (around €5/$7) and so on. 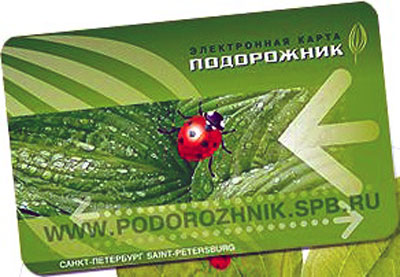 However, whether you stay just a week or longer, we highly recommend buying a pay as you go travel card called "Podorozhnik". It costs 100Rubles, and you just top up once with the amount you need and you are ready to go. If you're interested in this option find out more here, or ask us to buy one on your behalf.

With this card (We got one ourselves and it works great☺) you will avoid standing in the queue to buy a token every time you enter the Saint Petersburg Metro. Also, you will be able to use all the public transportation available in the city, including the Marshrutka. This price range of this type of card is between 50-100Rubles (Less than one Dollar or one Euro), then on top of that, you put any credit you want.

We believe buying the travel card Podorozhnik can be a good deal for independent travellers and visitors or anyone not using the subway so often.

During the Russian New Year or other special occasions such as the Scarlet Sails or the Night of the Museums at the White Nights festival, the subway works until 5 am and opens at 4 am on January 1st.

If you are wondering at some point where you are, then don't worry! To navigate yourself when taking the subway you can always look at the maps well located in each Russian metro station and inside every carriage of the trains. 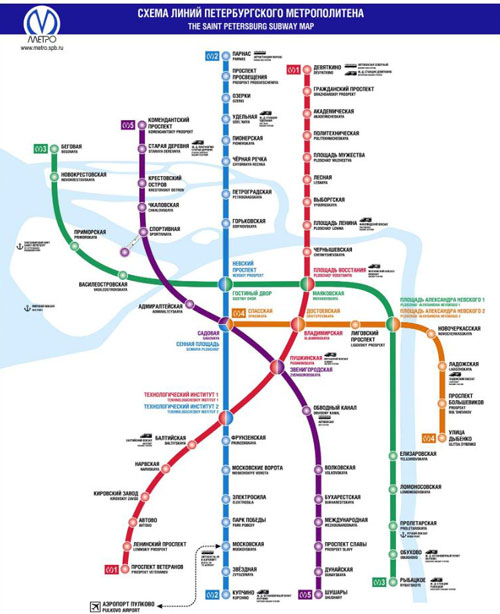 As we already said, all of the city metro maps are now in the English language, but when you arrive at a station you will hear the arrival station announced, followed by the name of the next stop in the Russian language only. Unfortunately for you, the names of the metro stations are and will be always announced in the Russian language.

For some visitors this can be confusing, so a good idea to avoid feeling lost would be to count all your metro stops, or much better, to plan your metro route online with this updated and interactive map of St Petersburg Metro.

Another option could be to buy a map before you go or try to get one for free at Pulkovo Airport or at the tourist offices in downtown.

Lastly, if you need to find your way out of the Saint Petersburg Metro make sure you lookup for the signed exit to the city (выход - way out) and which street (улица - street). On the opposite side look for the entry sign (вход - entrance).

Undoubtedly, the Saint Petersburg Metro is a major cultural and historical landmark that will greatly enrich your travel experience, so you should not miss it. If you plan to visit the subway, remember that central stations and those on the red line are particularly impressive, featuring tons of soviet symbology in bronze, glass, and stone.