The St Petersburg airport, one of the busiest and most important airports in Russia after Moscow, will be the place where you will touch down when you arrive by plane in Saint Petersburg, the cultural capital of Russia. 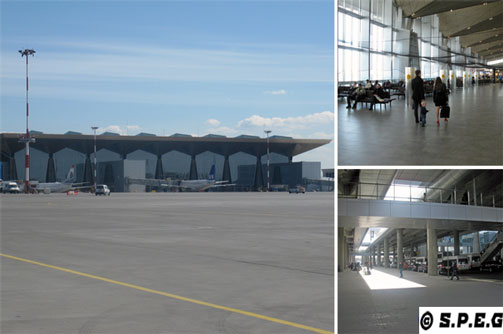 Known worldwide as Pulkovo Airport and shortened to LED (airport code), the gateway to northern Russia once consisted of two main terminals located side by side in the south part of St. Petersburg: Pulkovo I and Pulkovo II.

Today, both of the old terminals have been closed and replaced by a new, modern terminal that is able to compete with the leading European airports and offer a warm welcome to new passengers.

With the construction of Pulkovo's new terminal, referred to by the media as New Pulkovo Terminal, the long queues at the entrance or at passport control, as well as the lack of seating and trolleys, are things of the past.

Now the city of St Petersburg has a new fully equipped airport built from scratch that offers a capacity of 17 million passengers per year along with an efficient and modern infrastructure, which every Russian is proud of, including us.

The airport of Saint Petersburg officially known as Pulkovo Airport also won the 'Best Improvement for Europe' nomination - a prestigious 2014 Airport Service Quality (ASQ) Awards by Airports Council International (ACI). The Awards are granted annually based on the results of a global benchmarking program measuring passengers’ satisfaction while they are at the airport. This confirms that our airport is better than before and we have no doubt you will like it!☺

We guess you would like to know more about St Petersburg airport. That's why you are on this page! Isn't it? If so, just keep reading on. To get started just click on the links below!

GETTING FROM THE ST PETERSBURG AIRPORT

Pulkovo Airport is within 23 km of the center of St. Petersburg. From here to town you can take an official taxi upon your arrival at the airport or get a public city bus outside the terminal, or much better, arrange a private transfer before your arrival, and be greeted at the airport.

For your information, going by public transport can be a little challenging for newcomers to Russia and, personally speaking, stressful too, especially if you have a lot of luggage. But it's doable, and of course cheaper than booking a taxi or a private transfer. Sadly, St Petersburg airport is not yet served by metro or shuttle trains.

If you are on a low budget trip, definitely taking a city bus would be the best option for you. With less than one dollar or one euro, you can get to the city, but not to the city center (Nevsky Prospekt), where surely you have booked your Hotel.

All city buses leave from St Petersburg airport (outside the terminal) and stop at Moskovskaya Metro Station on the blue metro line, seven stops south of Nevsky Prospekt in the very center of St. Petersburg. From there you need to change the subway line, so take the red line if your final destination is Nevsky Prospekt. See the city metro map!

What city buses are running into town?

You can take bus number 39, 39A, or the minibus number K39, also known as Marshrutka. They all run between the nearest Moskovskaya subway station and the airport every 20-30 minutes.

Among all the bus options available, we recommend taking the express city bus number 39A because it is more comfortable than the other two (it has larger seats, better luggage space, and air-conditioning).

Lastly, the service operates daily from 5.30 am to midnight, and tickets can be bought in the arrivals lounges or onboard.

If you are not on a low budget trip, then you can take the official airport taxi upon your arrival. It will cost you less than $31/€28, depending on where you go in the city. You can find them in the arrivals lounge at the terminal before exiting. Just look for the marked Taxi Pulkovo!

The only downside of taking the official Pulkovo taxi is the waiting time for the next driver available. This may take from a few minutes to half an hour, depending on the season you travel.

As an alternative to the official airport taxi, you could also book a city taxi over the phone when you arrive. This would be the cheapest option, although you will have to wait for the taxi to arrive and/or pay an extra fee if you leave the driver waiting for you. If you are familiar with the App Uber, then Uber can be also another option to use. Whatever service you book keep in mind that the majority of Russian drivers don't speak English.

The average fare for a city taxi to the city center is around $20/€16 or slightly more; the price varies based on the type of car and size.

The easiest and quickest way to travel in comfort from St Petersburg airport to the city is to order a private airport transfer with a professional driver that will greet you at the airport and wait for you in case of a flight delay, or anything else you have to do, for example, change or withdraw money.

If you are interested in this option why not booking with us. If you book with us you will get a good deal along with reliable and professional service - plus you will help us to continue to run this website.☺