St Petersburg Pulkovo Airport
everything you need to know!

Pulkovo airport in Saint Petersburg is the fourth busiest airport in Russia after Moscow’s airports.

Founded on June 24th in 1932, the Pulkovo Airport is one of the busiest and fastest-growing international air hubs in Russia after Moscow's Domodedovo, Sheremetyevo, and Vnukovo airports. 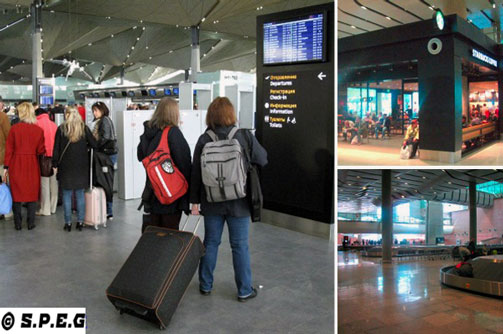 In response to this estimated increase in visitors and to improve the image of Russian transport infrastructure, the government decided to build a new, modern terminal to offer a pleasant experience to everyone traveling to and from Russia.

In fact, St Petersburg airport is no longer small, disorganized, and out-dated as, unfortunately, it was in the past; now it has everything you need to kill time while waiting for your flight. Everything you might expect from a modern airport, Pulkovo airport now has it!☺

MORE ABOUT THE NEW PULKOVO AIRPORT

A Look at the New Pulkovo Terminal

A Look Back at Pulkovo Terminal I

A Look Back at Pulkovo Terminal II

From Pulkovo Airport to Downtown

A LOOK AT THE NEW PULKOVO TERMINAL

Located 23 Km from the city center, and open for business in December 2013, the New Terminal of Pulkovo Airport (the third one) is the place where you will touch down or take off by plane, when and if you choose to travel to St Petersburg in Russia. 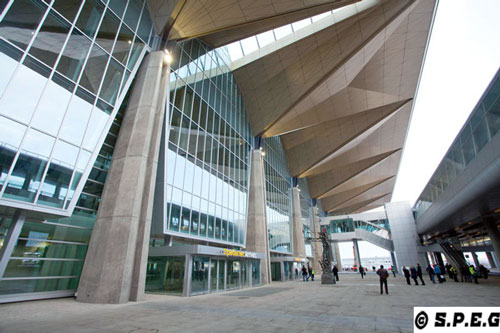 Please forget about the old Pulkovo 1 and Pulkovo 2, they are both shut down. Now there is only one big terminal serving both international and domestic flights and that is Pulkovo's new terminal.

For your information, Pulkovo airport boasts 110 passport control desks to speed up immigration processing and has 88 check-in desks to avoid long queues. Inside you can find several shops and cafes, restaurants, ATM machines, a children's playground, a bank, an information desk, a car rental desk, including facilities to relax and stuff your belly, or refresh your mouth before your departure or after your arrival.

Honestly, compared to the two old terminals, everyone landing at Pulkovo's new terminal will be impressed by the efficiency of the building, which consists of four levels connected by escalators, staircases, and elevators.

We bet, nobody will be disappointed with this new terminal! Rather, everyone will be amazed not only by the comfort it offers but also by its glass skylights and geometric panels and the unusual gold, domed ceiling that surely will remind you of the stunning domes on the city’s Church of the Savior on Spilled Blood.

A LOOK BACK AT PULKOVO TERMINAL I

Designed by the architect A.V. Zhuk and built in 1973, the Pulkovo airport terminal I served domestic flights and flights to the former Soviet republics until December 2013.

Although it is now closed, there are rumors that once the current renovation has been completed all domestic flights may once again depart from here, or it may be used as passenger waiting area for the new terminal. We'll keep you posted on that!

A LOOK BACK AT PULKOVO TERMINAL II

Built in the early 1950s and completely renovated and redesigned back in 2003, the Pulkovo Airport terminal II served international flights until December 2013. Today it has been shut down and replaced with the new, modern terminal Pulkovo.

FROM PULKOVO AIRPORT TO DOWNTOWN

To get to town from the airport, you can take a taxi, the bus №39 and №39Ex, or minibus K39. If you take the public transportation they will all bring you to the nearest Moskovskaya Metro station in no more than 20-30 minutes, depending on traffic. 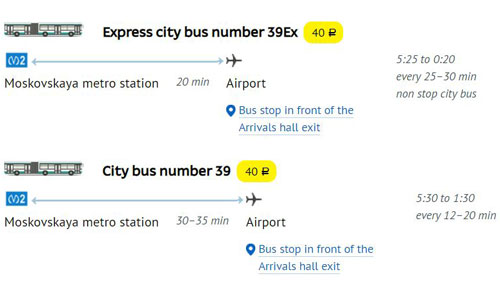 The city bus stop is located at the exit of the arrival hall on the ground floor of the terminal and runs daily every 15-20 minutes from 5.30 am until 01.30 am. Alternatively, the minibus runs every 5 minutes from 7.00 am until 23.30 pm, every day of the week.

You can pay for your taxi by credit card/cash at the Taxi Pulkovo counter or by cash to the driver at the end of a ride. While, when you take the city bus or the minibus you can buy your ticket on board but in cash only.

If you want to avoid getting overcharged by hotels or illegal taxi drivers and don't want to struggle with your luggage but travel stress-free then your best option is to book a private transfer before your arrival.

On the contrary, if you want to book a taxi upon your arrival then look only for the official Pulkovo Airport Taxi at the counter located at the Arrivals Hall on the first floor of the Terminal.