The City of St Petersburg Russia
A beautiful City That Never Fails to Amaze!

The city of St Petersburg can be a fascinating Russian holiday destination for anyone. The city is one of the most intriguing and historically significant cities in Europe, still unknown by many.

Located in the western part of the Neva lowlands, where the Neva River flows into the Finnish Gulf, standing both on the mainland and the surrounding islands, this young vibrant Russian city has always been a major cultural center and an important port. 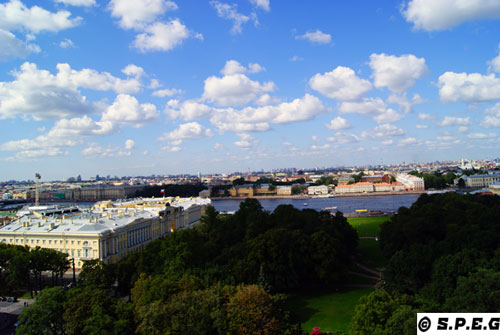 View of The City of St Petersburg Russia

Founded by Peter the Great on 16 May 1703 in the mouth of the Neva, on the day of the Holy Trinity, St. Petersburg has delighted for three centuries visitors to the northern capital of Russia with its majestic appearance, cultural sights, and charm.

History says that the Tsar-Reformer, on selecting the Apostle Peter as the city's heavenly patron, gave to Russia's new capital a name composed of two foreign words Sankt-Petersburgh.

Very soon it became a window through which Russia could reveal herself to Europe and Europe could contact Russia. It was from this place that threads linking the cultures of Asiatic and European countries stretched to the West and East.

Very few large cities in the world can bear comparison to St. Petersburg for the speed of its birth, development, and flowering.

St Petersburg Russia is probably the only city in the world to have acquired so much historical importance in such a short period of time. Born at the time, when the whole of Russia was turning towards Europe, the city of St Petersburg soon became the symbol of great progress in Russian culture and science. However, it also laid the cornerstone for future tragedies that shook Russia over the last 300 years.

The city changed its name several times. In 1914 it became Petrograd (the city of Peter the Great), as the previous name sounded somehow German. In 1924 it was called Leningrad (in memory of  Vladimir Lenin). And in 1991 the original name was returned to the city. Also, from 1712 to 1918 the city was the capital of Russia.

Unfortunately, Saint Petersburg has always been subjected to recurrent flooding. In fact, the worst floods took place in 1777, 1824, and 1924. The last two were the highest on record and flooded most of the city. In the 1980s one long dike was built across the Gulf of Finland to protect the city from destructive floodwaters.

Furthermore, if you ask anyone about the history of St Petersburg, their first thought would probably be linked to the terrible 900 day Siege during the Second World War when the great bravery and loyalty of the residents of Leningrad surprised the whole world.

Thanks to the heroic deeds of the Russian people during the Siege, Leningrad was the first city in Russia to be awarded the title of Hero City.

A city built on the water among graceful canals, colorful bridges, and a poetic atmosphere.

Created by joint efforts of outstanding Russian and European architects, engineers, painters, sculptors, and scholars, the life of St. Petersburg is inseparably linked with the large Neva River, which gives the city much of its beauty.

The granite ledges of embankments, metal arrows of drawbridges, imposing silhouettes of churches, palaces, cathedrals, and monuments, as well as its many museums, theaters, and libraries, have given worldwide renown to the city and impressed millions of visitors.

The city of St Petersburg comprises 42 islands and over 300 bridges cross the rivers and canals. Some of the bridges crossing the Neva River are drawbridges that are open during the night from spring to autumn to let the ships pass.

You should also know that a risen drawbridge is one of the symbols of the city and one of the major tourist attractions during the so-called White Nights Festival that take place in the city every summer. In fact, many tourists never miss a night boat tour to watch these spectacular drawbridges in action. And, you too shouldn't!☺

And, from the middle of June till the beginning of July darkness does not fall upon Saint Petersburg and the twilight lasts all night. Thanks to the city's geographical location, it is nearly as light at night, as during the daytime. Many Russian poets and writers, such as Pushkin, Gogol, and Dostoevsky, wrote about this unique phenomenon.

See below a popular poem:

...And when, not letting the night’s darkness
To reach the golden heaven’s height,
The dawn after the sunset hastens –
And a half-hour’s for the night.

The city of St Petersburg is a place for all seasons, a place that became a new focal point at the crossroads where civilizations meet.

Once the capital of great Russian empire, now one of the most historical, splendid and congenial cities in Europe, St. Petersburg Russia, also known as the City of Bridges or the Venice of the North, is a city adorable in any season, although random changes in the weather are common here.

For example, the sun can suddenly hide behind the dark clouds in summer; it can rain in January, and the snowfall can begin at any time in April. In winter you can also expect long days of darkness and cold. Scattering rain can happen all year round, so if you come make sure you bring an umbrella or a raincoat and a good pair of shoes.

Apart from the changeable but unique in its genre atmospheric scenery that you definitely should see, the city of St Petersburg, thanks to its unrivaled treasure trove of art and culture, has been also designated a UNESCO World Heritage Site, thus becoming the cultural heart of Russia, as well as the most popular and visited city in the country in the last 15 years.

What else to say!

Today St. Petersburg still feels every bit an imperial capital city, largely frozen in time, but very open to welcome and entertain you at any time of the year. The city has an enormous amount of individual tourist attractions that remain enchantingly beautiful and steeped away in fascinating history.

The city is also brimming with colorful, innovative, and fun restaurants serving everything from traditional Russian food to Nouvelle cuisine. The nightlife' scene is also going from strength to strength and is now considered to be the most varied and friendly in the country.

Without any doubt the city of St Petersburg is a place will never fail to amaze, regardless of the season you choose to come! ☺