The multitude of rivers and canals of St Petersburg is an essential part of any sightseeing itinerary. Discover which ones to see on a boat trip!

Did you know that St. Petersburg is often called the Venice of the North?

Since its foundation, the rivers and canals of St Petersburg have always played a key role as the city was built on the water near the Gulf of Finland. The number of all the rivers, inflows, and canals within the Russian city amount to about a hundred and the total length of the water arteries is approximately 300 kilometers. For this reason, Saint Petersburg is also called the “Venice of the North” as Goethe dubbed it.

All the rivers and canals in the city are important because they were used for trade and by military vessels, acted as a valve to prevent floods, and were used as a way to move from one island to another. Today they still play the same huge role; plus some of them have become a tourist attraction itself worth visiting.

Many of the city’s most beautiful Palaces and Cathedrals, such as the Winter Palace, the Admiralty, and Peter Paul Fortress, are situated on the banks of the Neva River, Bolshaya Neva, Malaya Neva, Fontanka River, Moika River, and Griboyedov Canal, which are the main city's waterways.

Personally speaking, the most relaxing and fun way to explore the city of St Petersburg is by taking a canal boat trip in the summer so you can enjoy the warmth and breeze of the day, or much better, a romantic night under the raised bridges and the twilight sky of the White Nights.

the most important
RIVERS AND CANALS IN ST PETERSBURG

To get started just click on the links below or scroll down the page. 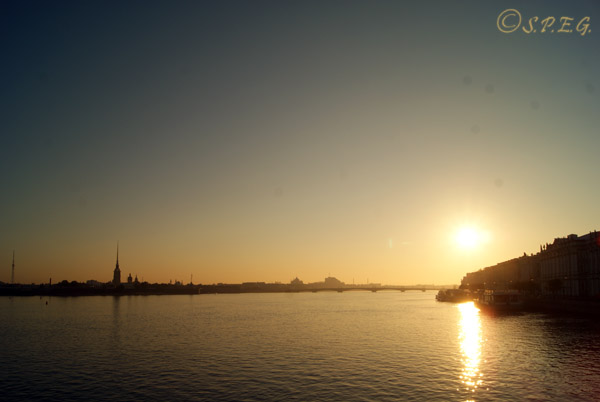 The Neva River, whose waters account for a tenth of the area of the city, is the most impressive waterway in Saint Petersburg. It is 74 km long (32 km in the city), 300 to 1200 meters wide and up to 24 meters deep. Considered the third largest river in Europe (after the Volga and the Danube), the Neva River, with its gorgeous draw bridges and adorned granite embankments, is undoubtedly an essential part of St Petersburg's charm. 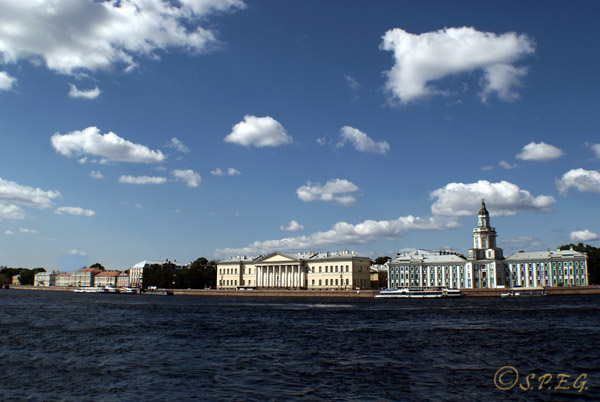 The Bolshaya Neva is the largest armlet of the Neva River. It flows gracefully into the Neva Bay of the Gulf of Finland, in the area surrounded by Vasilievsky Island, Gutuevsky Island and Kanonersky Island. Bolshaya Neva River is 3.62 Km long, with a width that varies from 200 meters to 400 meters, while the depth ranges from 8.2 meters to 12.8 meters. Beautiful historic buildings embellish the river on both of its banks. 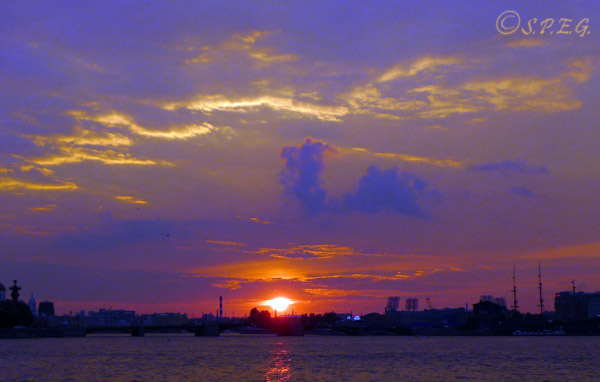 The Malaya Neva crosses the famous Spit of Vasilievsky Island in the historic center of the city and flows into the Neva Bay between Dekabristov Island and Petrovsky Island. With a length of 4.3 Km and a width of 200-375 meters, the Malaya Neva is considered the second-largest branch of the Neva River. When cruising on this river by boat, watch out for the two following bridges: Exchange Bridge and Tuchkov Bridge, which span the Malaya Neva. 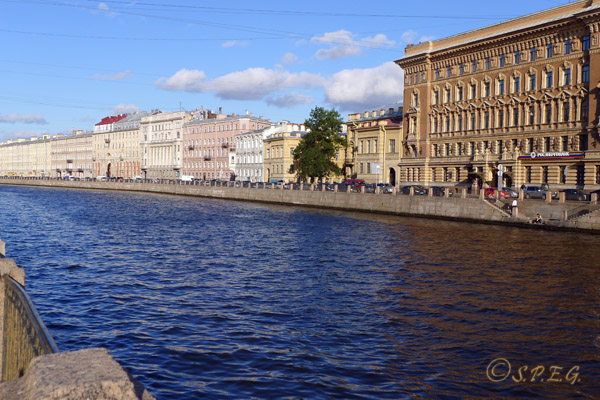 Running through the heart of St Petersburg, the Fontanka River is the busiest river among the city excursion boats. Its embankment is filled with elegant royal residences and unaltered bridges which will certainly impress you. Originally, the Fontanka River, which is the left branch of the large Neva River, marked the edge of the imperial city. Today, with a length of 6,700 meters, and a width up to 70 meters, it still plays an important role in the geography of the city. 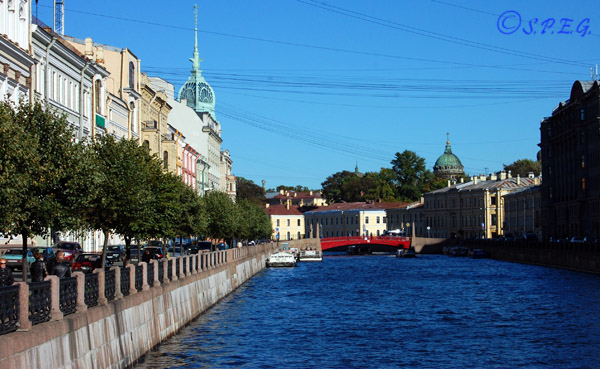 The Moika River is a small river (5 Km long and 40 meters wide) surrounding the central part of St. Petersburg. Famous for crossing the Blued Bridge, Petersburg's widest bridge at 97.3m, the river is an attraction itself. However, what makes this river interesting is that it is crossed by 15 bridges and lined with fascinating 18th-century architecture, including the Stroganov Palace and the Yusupov Palace, the New Holland Arch and the notable St. Micheal's Castle. 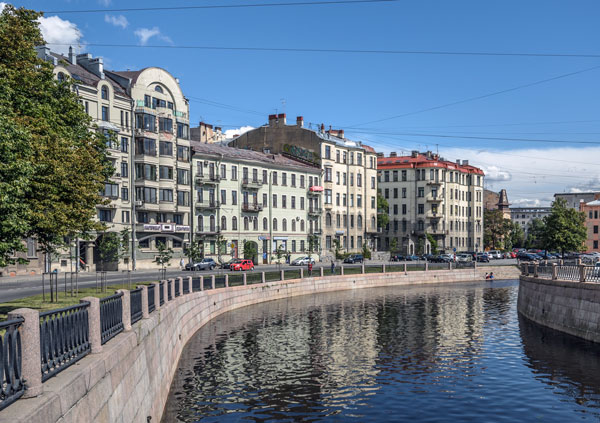 The Karpovka River flows along the Petrograd Side and divides the Petrogradsky and Aptekarsky Islands. Located outside the city the name of the river dates back to the earliest years of the city and beyond. Along the banks of the Karpovka River, you can find several interesting buildings such as the St. John of Rila Convent, the First Residential Building of the Leningrad Soviet, and the Botanical garden. There are also seven bridges currently stretching across the Karpovka River, the oldest ones are Aptekarsky and Silin Bridges. 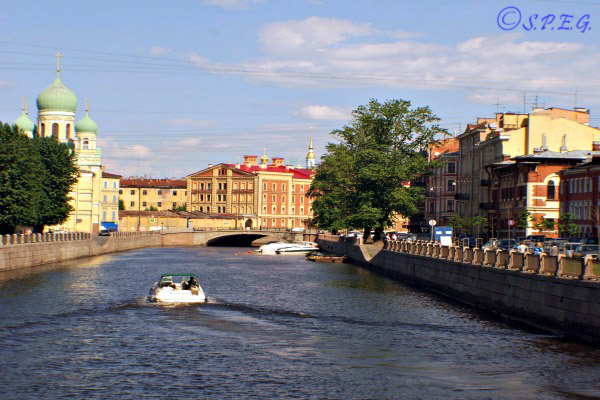 Known also as a street, the Griboedov Canal, stretching 5 km through the very center of the imperial city is crossed by 21 decorative bridges, among which there is the popular Bank Bridge. Compared to the other rivers and canals of St. Petersburg, this canal is the most picturesque and striking because of the historical buildings and beautiful Russian churches lined along the banks, such as the famous Church on the Spilled Blood. 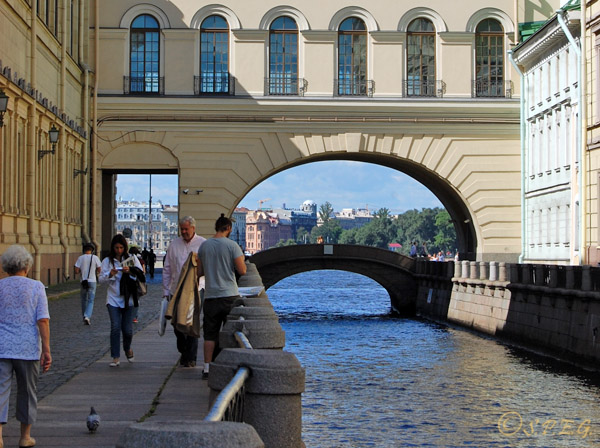 The Winter Canal is one of the shortest rivers and canals in St Petersburg as well as one of the most romantic spots of the city. Dug in 1719 and built a few years later by the eminent architect Giacomo Quarenghi, which he also built the three-story building of the Hermitage Theater on its right bank, the canal is only 228 meters long and 20 meters wide and is connecting the Neva and Moyka River in the area of the Winter Palace. This is the reason why locals call it "The Hermitage Bridge or Winter Canal". 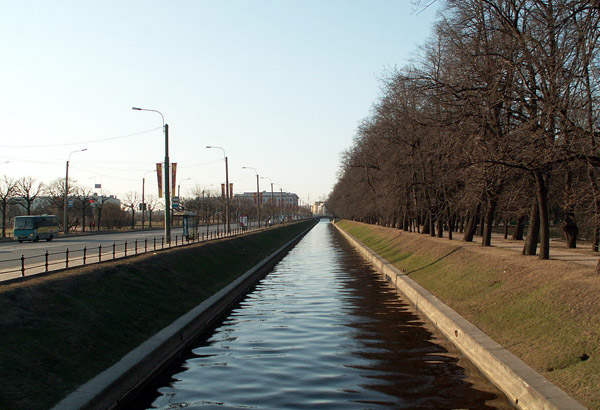 Created by architect Yury Felten, the Swan Canal is one of the oldest rivers and canals in the city made of stones. With a length of 648 meters the canal lead towards Mikhailovsky Castle and separates two of St. Petersburg's most famous green spaces - the Field of Mars and the Summer Garden. Throughout the 18th century, the Swan Canal was also deepened and strengthened several times, but granite supports fixing the banks of the canal were only attached in the middle of the 20th century. 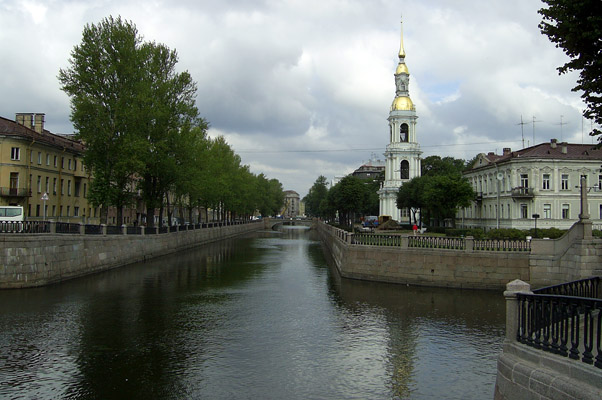 The historic Kryukov Canal is not so popular as it is the Griboedov Canal, the Moyka, or the Fontanka River, but it is important to mention because its granite embankments and old bridges are quite beautiful and many of St. Petersburg's most impressive attractions stand on its banks,  such as New Holland, the Mariinsky Theatre, and the bell tower of St. Nicholas Naval Cathedral. Built between 1717-1720, the canal has a length of 1000Km and connects with six nice bridges that cross the canal.

You should know that St Petersburg's rivers and canals are at their best in summer. They come alive and are filled with boats. Night and day there are boat tours, boat buses, and boat taxis cruising the central part of the city. Therefore, if you plan to visit St. Petersburg from May to November, make sure you book a Canal Boat Tour to enjoy the city's rivers and canals.☺