The Mariinsky theatre is one of the most illustrious and amazing theatres in the world.

Located on Theatre Square, the Mariinsky Theatre is the home of Russian ballet and opera in Saint Petersburg and in the whole Russia since 1860s. Named after Empress Maria Alexandrovna, wife of ruler Tsar Alexander II at the time of its debut, the theatre's elegant neoclassical design and dazzling décor heralded the age of Russia's huge impact on the international stage of operatic ballet. 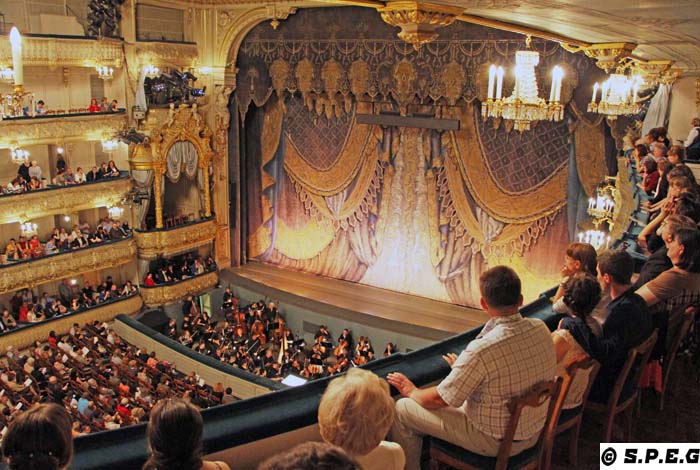 Inside the old Mariinsky Theatre in St Petersburg Russia

The theatre has been presenting the world with a plethora of great artistes for more than two centuries. During this period the building of the theatre was also reconstructed a number of times. In 1944, it was completely restored after the war destruction. The works are thought to be completed around 2005.

Billing the most talented Russian and foreign performers from around the globe, the opening night performance of Mikhail Ivanovich Glinka's opera, A Life for the Tsar, was soon followed by equally masterful productions, such as La Forza del Destino (1862), Boris Godunov (1874), Prince Igori and The Queen of Spades (1890).

Opera maestro Caterino Cavos played a prominent role in the success of the enterprise and under the guidance of classical choreographer Marius Petipa, the ballet company premiered Peter Tchaikovsky's, The Nutcracker (1892), Swan Lake (1895) and Sleeping Beauty (1890), with performances that forever influenced professional dance.

As a foremost St. Petersburg attraction, visitors say the theatre is a piece of art in itself. Even first time opera-goers describe the exquisite interiors, incredible music scores and moving performances as a sublime and truly unforgettable experience.☺

a look inside mariinsky theatre

Interested to visit the Mariinsky theatre? If so, click on the links below or scroll down the page to learn more. 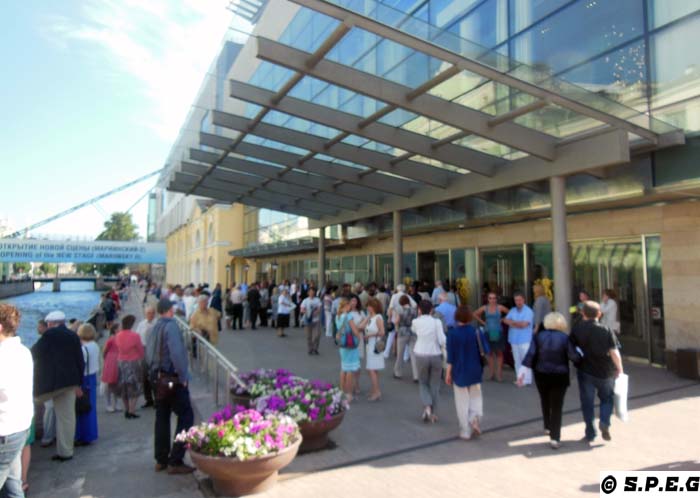 Entrance of the New Mariinsky Theatre in St Petersburg Russia

Both are considered one of the world’s most important cultural institutions and the best places to enjoy classical music and opera and ballet in Russia, and perhaps in the whole world. Between the two venues, the new one is less touristy and more comfortable than the old one.

Both places have become a fashionable spot with an audience of people from all ages and countries. However, the majority of people going there are high profile locals and Russian citizens in general who are very fond of classical music. We would guess 10% only are tourists!

Anyone visiting both of the venues will surely feel an aristocratic and historical atmosphere and enjoy beautiful settings, performances, and amazing acoustics. So we highly recommend a stop there even if you are not a classical music lover.

Following the Russian Revolution in 1917, the theatre company languished, but with the skillful direction of ballet teacher Agrippina Vaganova, it recovered and went on to triumph. Her commitment to training dancers supported the success of the Kirov Ballet under Soviet rule and in 1919, the theatre was renamed the Kirov Theatre.

The quality of artistic expression and dance talent flourished and the company achieved world-class status, as ballet greats Anna Pavlova, Rudolf Nureyev and Mikhail Baryshnikov stole the hearts of audiences.

During the cold war, the company fell into decline again and many of the dancers defected to the West. The collapse of the Soviet Union ushered in a new era and in 1992, the theatre's Imperial name was restored.

Today, the Mariinsky Theatre is home to the Mariinsky Ballet and Opera Theatre, however it is still known as the legendary Kirov Opera, Ballet and Orchestra and praised for being one of the top six opera-ballet companies in the world.

You can purchase tickets through the official website of the theater (see link below) or upon your arrival at the ticket office. E-tickets can be brought online very easily and just need to be scanned at the entrance.

Please note that there are higher prices for tickets for foreigners. All citizens of Russian Federation and foreign citizens working or studying in Russia pay standard ticket rate.

It takes about 20 minutes to walk from any of the metro stations to the Mariinsky Theatre.

From Sennaya Ploshchad, go south down Sadovaya Ulitsa and take the second turn after the square turn right onto Prospekt Rimskogo-Korsakova. Then just over the Griboedov Canal and take the first right turn onto Ulitsa Glinki, which is directly opposite the St. Nicholas Cathedral. From this point, it is approximately 150 meters or 500 feet to Teatralnaya Ploshchad and the Mariinsky Theatre.

If you are coming from Nevsky Prospekt, take Bus N.27 (diesel bus) or Trolley Bus N.3 or N.22 (electric bus) from the odd-numbered north side of the street. These transportation options  also take approximately 15-20 minutes.

It is highly recommended to purchase e-tickets online in advance. This will save you time instead of buying tickets on the spot, plus ensure you get seats in the section you prefer. Book early to get the best seats. Russians are fond of classical music and the opera! If you use the website Kassir.ru, it doesn't have English translation, but Google translate will work.

ACCOMMODATION NEAR the mariinsky theatre

Our picking list of hotels near the Mariinsky Theatre 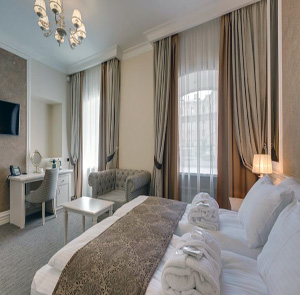 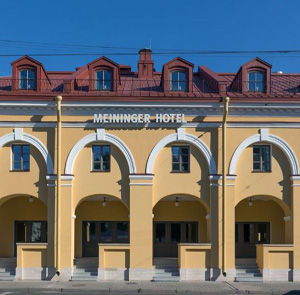 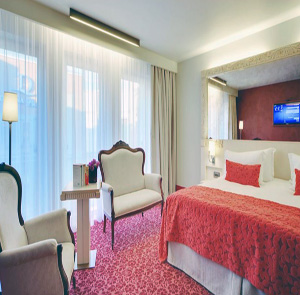