Discover all the best churches in St Petersburg Russia and admire their architectural beauty.

Whether you long for a peaceful moment away from all the fuss or Orthodox churches just spike your interest, you are sure to find a suitable church to visit in the Northern Capital of Russia.☺

Built in the Russian Baroque and Neoclassical style during the so-called age of enlightenment, all churches in St Petersburg offers an intriguing and engaging insight into Russian culture and history - plus many of them are architecturally beautiful to see.

Many of these impressive Russian churches were designed 200-300 years ago, following the taste of the Tsars and a few conservative aristocratic clans. They were built by the hands and creativity of great Russian and foreign architects, such as A. Voronikhin, O. Monferan, A. Parland and F.B. Rastrelli, who gave such grandeur to the principal buildings of Russia’s new capital.

History says that during the Bolshevik Revolution in 1917 a lot of Orthodox churches in St Petersburg were blown up and destroyed, while other, luckier ones were turned into museums or used as cargo houses.

Because the Communist political party of that time was against any freedom of worship. So after the bloody Russian Revolution and until the end of the 1980s, there were only a few churches left in Leningrad because of the Soviet regime. But after the beginning of Perestroika, all the Russian churches, those ruined or not, were returned to the Saint Petersburg Diocese and the process of their revival finally began.

Today, thanks to a previous plan of reconstruction and renovation, which is still ongoing, Petersburg residents have many nice places of worship to go, while visitors like you have a huge and varied list of picturesque churches in St Petersburg to explore.

There are so many outstanding orthodox churches in the city of St Petersburg to see (about 50), but you don't need to see them all. Below we've made a list of what we think are the most interesting and beautiful Churches in St Petersburg worth seeing. We hope our selective list will help you decide which of them will make it to your sightseeing list.☺

Church of the Savior on the Spilled Blood

Church of the Intercession

Church of the Nativity

THE CHURCH OF THE SAVIOR ON SPILLED BLOOD 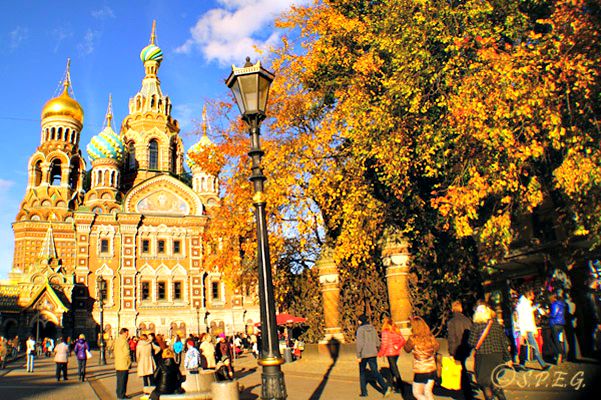 The Church on the Spilled Blood

With its 79.8 meters high and its richly colored onion domes, the Savior on the Spilled Blood Church, is one of the most beautiful and picturesque churches in the imperial city, as well as one of the most popular in the world. This Moscow-style church is the number one attraction to see during your visit to the city. Also known as the Church of the Resurrection, it got its awkward name because it was built on the spot where Alexander II was murdered in 1881. 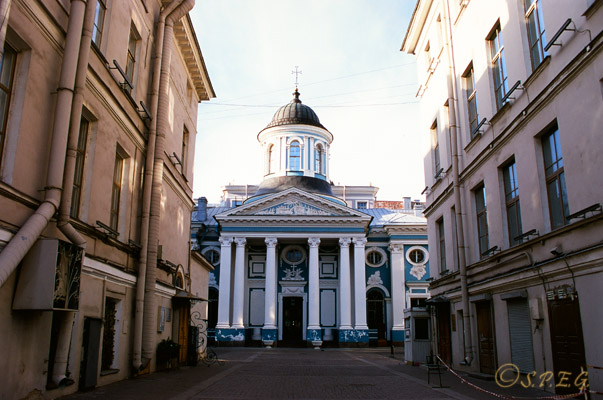 Standing on the Northern side of Nevsky Prospekt opposite Gostiny Dvor you can admire the charming Armenian Church of St Catherine. Although it is not one of the most popular churches in St. Petersburg for visitors, its central location makes it an easy visit. This orthodox church has a modest 180 meter-long arcade covered by a beautiful pitched glass roof and well decorated interiors.

THE CATHOLIC CHURCH OF ST. CATHERINE OF ALEXANDRIA 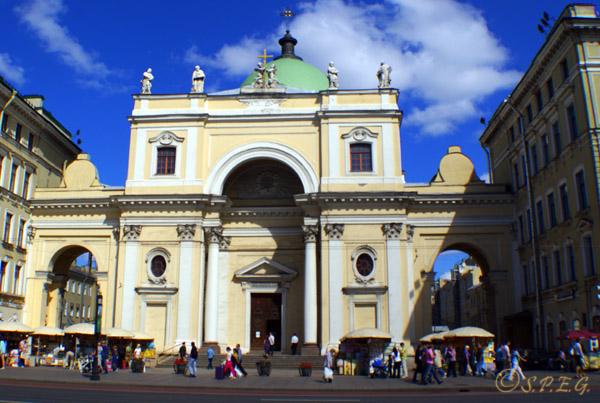 The Catholic Church of St. Catherine

The Catholic Church of St. Catherine is one of the oldest and most popular Catholic churches in St Petersburg and the whole of Russia. Centrally located, this church is a reflection of the past years of Russian history, the great, the stormy, the desperate, and the re-emergence of Roman Catholicism in Russia after decades of repression. Visitors might only spend 10-15 minutes here but it's definitely worth seeking out.

THE CHURCH OF SS. SIMEON AND ANNA 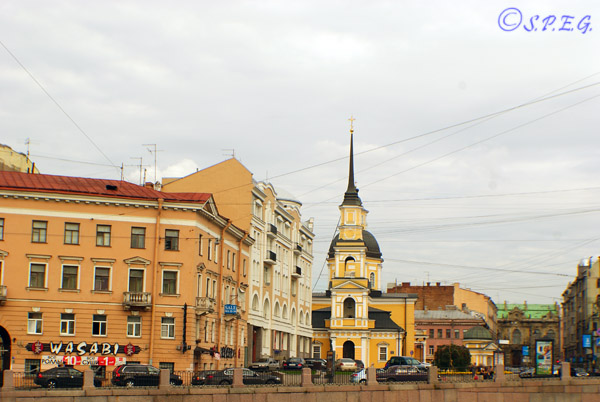 The Church of SS. Simeon and Anna

Erected on one of St. Petersburg's most picturesque corners where Belinskogo street crosses the Fontanka River, the Church of SS. Simeon & Anna is one of the oldest and finest examples of early Baroque architecture in the city. Fully restored and functioning, today this charming Orthodox Church is a hidden jewel out of the touristic beaten tracks -  a place of worship open to the public.

THE CHESME CHURCH (Of the Nativity of John the Baptist) 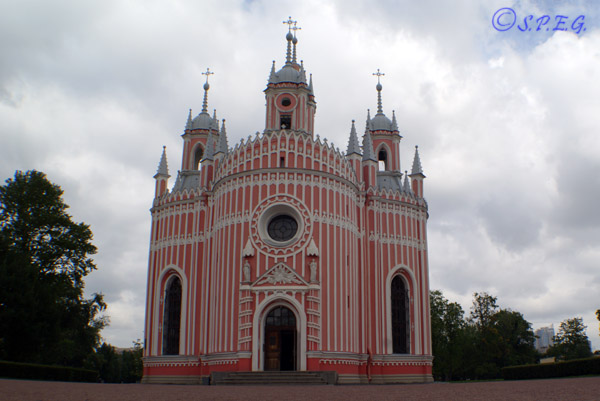 The Chesme Church is one of the most impressive Orthodox Churches in Saint Petersburg and a really rare example of early Gothic revival influence in Russian architecture. Built under Catherine the Great as the house church for the Chesme Palace, the church served as a resting post between Saint Petersburg and Tsarskoe Selo during the reign of the Tsars, while today is a place of worship open to the public.

THE CHURCH OF THE GREAT MARTYR AND HEALER ST. PANTELEIMON 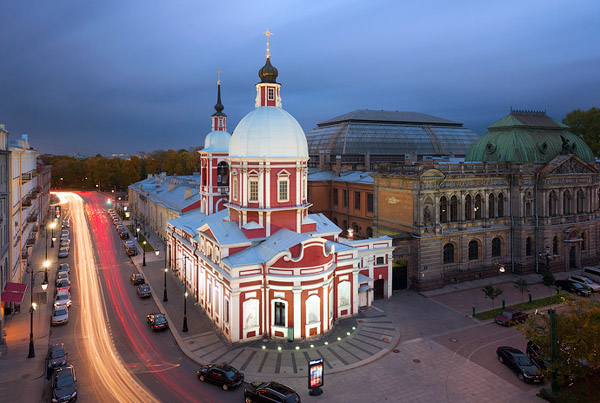 The Church of St. Panteleimon

Built during the reign of Peter the Great to celebrate two major naval victories over the Swedes, which both fell on the feast-day of St. Panteleimon, this small charming red-and-white Church of St. Panteleimon it is considered by locals one the oldest and nicest churches in St. Petersburg. After being restored in 1990, it is now a museum and a place of worship open to the public.

THE CHURCH OF THE INTERCESSION OF THE HOLY VIRGIN 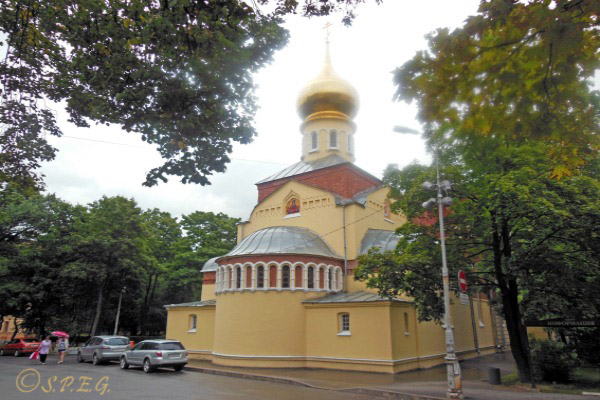 The Church of the Intercession

Situated in the North-West of St. Petersburg inside the picturesque student campus of the city's prestigious Polytechnical University, which is itself a masterpiece of Russian Neoclassicism, the Church of the Intercession of the Holy Virgin is one of the smallest churches in the Imperial city. Today this charming Orthodox church is fully functioning and open to the public.

THE CHURCH OF THE NATIVITY OF JOHN THE BAPTIST 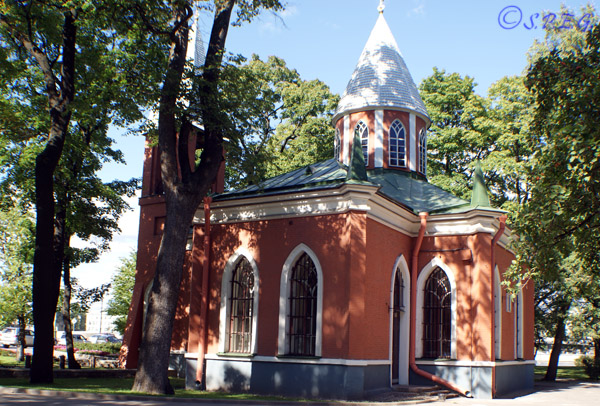 The Church of the Nativity

Not far from the Kamennoostrovskiy Palace, an old former Imperial palace on the South-Western promenade of Kamenny Island, you will find a beautiful park and the tiny unusual red-brick Church of the Nativity of John the Baptist. Created by the architects Yuri Velten and Giacomo Quarenghi, this is one of the few well preserved Gothic churches in St Petersburg Russia which have not been destroyed during the War.

THE CHURCH OF ST. ISIDORE 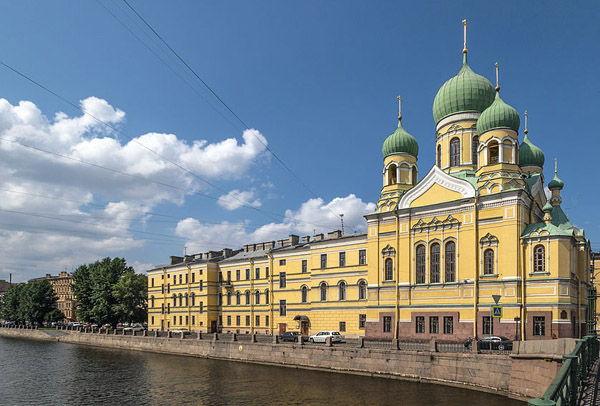 The Church of St. Isidore

The Church of St. Isidore is one of the last Orthodox Churches in Saint Petersburg to be erected before the Bolshevik Revolution. Built in 1903 for Estonian orthodox people living in the city of St. Petersburg, you will likely pass this charming Neo-Byzantine church at some point during a canal boat tour or while exploring the Kolomna District located nearby.

THE CHURCH OF THE VLADIMIR ICON OF THE MOTHER OF GOD

The Church of the Vladimir Icon