the chesme church
A DELIGHTFUL gothic church not to miss!

The Chesme Church was built in 1777-1780 and is one of the rare neo-gothic buildings in the city of Saint Petersburg.

In the small town of Red Village in the southern district of Krasnoye Selo lies an enchanting Russian Orthodox church known by local as Chesmenskaya Tserkov that appears to have jumped right off the pages of a fairytale book.

Designed in 1780 by Yury Felton, court architect for Catherine the Great, this small pink and white striped church with romantic medieval turrets resembles a wedding cake and is one of the first Gothic Revival buildings in early St. Petersburg.

Chesme Church, which belongs to The Chesme Palace, commemorates the defeat of the Ottoman Turks at the Battle of Chesme during the Russo-Turkish War of 1768. Although commonly known as Chesme Church in honor of Russia's military success, upon completion, it was bestowed with the name Church of the Birth of Saint John The Baptist and consecrated on St. John’s birthday.

Situated south between the city of St. Petersburg and The Summer Palace in Tsarskoye Selo, Chesme Church was once a resting place for travelers on long journeys and is off the beaten trail for tourists. Those who like to venture beyond the city's main attractions say it's well worth the time to go exploring and visit this remote, but a historic and picturesque place of worship.

a look inside the chesme church

Interested to visit the Chesme Church? If so, click on the links below or scroll down the page to learn more.

More About the Church

more about the church

After the Bolsheviks came to power in 1917, the church and palace were transformed into a labor camp and in 1923, the church doors were shut and it was used as a storage facility. Prior to WWII, the Soviet Institution of Aviation Technology gained control over the land for scientific research and testing and still occupy the palace to this day.

The land around Chesme Church is a burial site for war heroes and soldiers who died in the Siege of Leningrad. In the 1970's it was a museum for The Battle of Chesme and in 1991, following the fall of the Soviet Union, it was returned to the Orthodox Church. Today, parishioners come for services and visitors come to pay respect to the brave soldiers who lost their lives at war.

For your information, the inside of the church is not that unique, but the outside is. The color and design of the exterior of the church is very beautiful and unusual for St. Petersburg. When you walk inside you may see the original religious artifacts and the alter with gold icons, while when you're outside you can see the war cemetery.

It is very interesting to know that as the exact spot where Empress Catherine II heard the news that Imperial forces had won against the Ottoman Turks, she deemed it the site where the church was to be built. The defeat of the Turks was credited to Count Alexei Orlov, who was greatly rewarded for leading Russia's first naval engagement in the Mediterranean Sea against the Turks outside the city of Chesme on June 24, 1770.

You should also know that Rasputin’s body was temporarily held here in 1916.

There is no need to buy tickets as the entrance to the church is free of charge.

When exiting Moskovskaya Metro Station, go to the left, crossing the garden and walk towards the underpass. From there, exit to the left and walk to Moskovsky Prospekt. From Moskovsky Prospekt, turn right onto the next street. Take the second street on your left. The church is within 200 feet on the right. Approximately a 10-15 minute walk.

Our picking list of Hotels nearby the Chesme Church 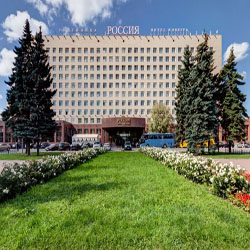 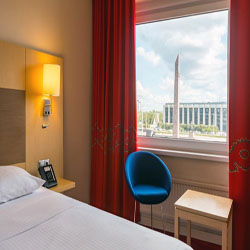 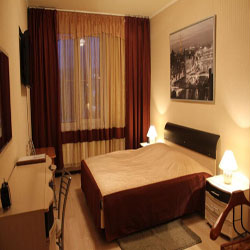