The St Nicholas Cathedral is an active Russian Church very beautiful both outside and inside.

The St. Nicholas Naval Cathedral is in a picturesque area of St. Petersburg where quaint footbridges cross winding canals that connect to The Moika and Fontanka Rivers. Overlooking the Kryukov Canal, its golden spires and domes, and fanciful pastel blue and white façade create a striking contrast against the sky and the lovely tree-lined embankment.

Named after St. Nicholas, patron saint of sailors, this pretty cathedral is cherished by The Russian Navy, local parishioners and visitors as a monument to those who lost their lives at sea.

Within its walls, a memorial plaque honors 42 seamen who perished off the coast of Norway, with an inscription that reads, “In eternal memory of the sailors of the Russian Float who were taken by the sea on April 7, 1989.” In the Upper Church, two marble plaques hang in remembrance of sailors who died in the Russo-Japanese War in 1904.

Today, the St. Nicholas Cathedral is an active church with daily worship, as well as a popular attraction. Some visitors come to pay respects for the fallen, admire the impressive gilded paintings, iconostasis carved from wood and the beautiful bell tower on the lawn overlooking the canal. Others come to attend services, enjoy the small choir and hear the lovely chime of the church bells. In this quiet, uncrowded setting, some say this Russian cathedral is the most beautiful in all of St. Petersburg.

a look inside the st nicholas cathedral

Interested to visit the St Nicholas Cathedral? If so, click on the links below or scroll down the page to learn more.

MORE ABOUT THE CATHEDRAL

St. Nicholas Cathedral is a major Baroque Orthodox building in the western part of the city. It consists of two separate churches: the lower Saint Nicholas Church located on the first floor, and the Upper Church or the Epiphany Church on the second floor.

The Lower Church is used for everyday services and holds the cathedral's primary shrine, with a revered icon of St. Nicholas. The Upper Church is used for weekend masses and celebrations. In 1760, Empress Elizabeth was present for the consecration of the main altar, while the upper altar was consecrated in the presence of Catherine the Great.

A tour inside atmospheric cathedral will take you through stunning carved wooden iconostasis and 18th-century icons paintings as well as historical memorials such as the memorials to the victims of the submarine tragedies on the Komsomolets and the Kursk and the 1904-1905 Russo-Japanese War, including ten images in memory of the naval victories over the Turkish and Swedish Fleets. Outside you can enjoy a walk in the small park garden which offers an obelisk dedicated to sailors of the Emperor Alexander III warship in the 1905 battle against the Japanese.

Affectionately named the “Sailor's Cathedral,” it was sailors who were the first residents in this section of St. Petersburg. As the population grew, Empress Elizabeth decided to replace the existing church with the baroque cathedral we see today. It was completed by architect Savva Chevakinsky in 1760 and named St. Nicholas Naval Cathedral in 1762. From here, prayers for a safe voyage were given to the 18th-century sailors heading out to sea.

You should also know that this orthodox Russian cathedral was one of the very few functioning during the Soviet regime, and, it was the first naval cathedral that traditionally fed the sailors of the Russian fleet that's why there are many memorial dedicated to Russian sailors killed during various war conflicts.

There is no entry fee as this is a working church.

The St. Nicholas Cathedral is located at the intersection of the Kryukov and Griboedov Canals in downtown St. Petersburg, just a short walk from the Mariinsky Theatre. If you go there from Nevsky Prospekt then you can take Buses N.3 or N.27 or even Trolleybus N.22 or Tram N. 7 down Sadovaya Street. Just ask to get off by the theater. Taxis are also available and a short drive from the main street.

Our picking list of Hotels nearby St Nicholas Naval Chathedral 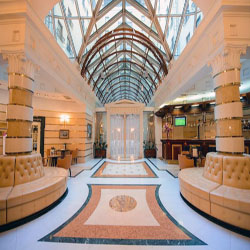 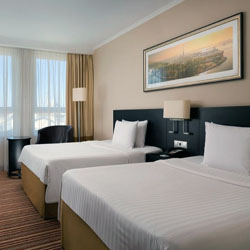 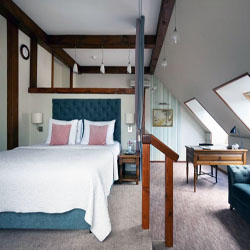