The museum of the defense
AND siege of leningrad
A reminder of the horrors of the 20th century!

The museum of the defense and siege of Leningrad is a must see museum for anyone keen  to understand what the people of Saint Petersburg went through from 1941 to 1944.

For the people of Russia, September 8, 1941 to January 17, 1944 marks a time of horrific suffering known as The Siege of Leningrad. Also known as the 900-Day Siege during WWII, Nazi Germany and Finnish troops surrounded the city of Leningrad (St. Petersburg); forming a blockade that prevented supplies from entering and citizens from evacuating.

The Museum of the Defense and Siege of Leningrad is a tribute to those who faced that brutal two and a half years of unthinkable hardship.

Soviet defending forces and citizens fought bravely against the invading armies while enduring constant air and artillery bombardment, but deprivation crippled their ability to fortify the city.

Although the winter months froze Lake Ladoga to the east and provided a life-line for trucks to haul meager amounts of food and supplies, it wasn't enough to sustain them. Cold and hunger became another unmerciful enemy that ravaged the population. Despite all the difficulties and casualties of that time, the Russians managed to defeat the Nazis and free their city.

Today, their sacrifice and ability to last of the survivors is engraved on the moral sense of the city. And, to remember the bravery of those survivors and those people who died to defend the city a museum was established. It held 37,000 exhibits donated by citizens, including Nazi tanks and aircraft.

But in 1948, the museum director was shot when Stalin ordered the destruction of every exhibit during his purge of the Leningrad Party. After the Soviet regime collapsed, the museum reopened on September 8, 1989 and again, survivors and families donated in testament to the enormous hardship and courage of the people.

Although modest in presentation, the Museum of the Defense and Siege of Leningrad is both powerful and poignant. Visitors say they are deeply moved and gain a greater understanding of the tragic events that left the people of Russia with a profound sense of pride and sorrow.

Interested to visit the Museum of the Defense and Siege of Leningrad? If so click on the links below or scroll down the page to learn more.

More About The Museum

more about the Museum

Located across the Fontanka River Embankment from the Summer Garden and Field of Mars on the east side, the Museum of the Defense and Siege of Leningrad hosts an interesting collection of original weapons and uniforms as well as propaganda materials and detailed descriptions and exhibits on daily life during the siege of Leningrad.

Inside the museum you can expects to see the following exhibits:

Personally speaking, a visit to the museum can be a real eye opener for visitors who don't know much about the Siege of Leningrad. And, at the same time, it can also be an interesting place to see for history lovers. Here you can learn about the incredible suffering the people of Leningrad experienced during WW2 and their brave fight against the siege.

Surely, a must-stop for those who want to understand the history of the city!

You should know that by the end of September 1941, depleted oil and coal left the city without heat. As the harsh winter set in, pipes froze and broke, leaving the people without drinking water. By the first November, food rations were less than bare minimum and the population of wild and domestic animals disappeared as people struggled to survive.

Approximately 11,000 citizens died that November and another 53,000 in December. Frozen ground prevented burial, so corpses lie in the streets and by summer, the lack of basic sanitation spread disease at an epidemic rate. Over 800,000 people perished in The Siege of Leningrad and those who survived bore the wounds of immeasurable trauma.

The current museum has only been collecting exhibits since it reopened in the 1980's.

You can buy entrance tickets at the ticket office inside the building.

The museum can be accessed by way of the bridge where the Moika and Fontanka Rivers intersect. Go east over the bridge onto Pestayla Ulitsa (Avenue). Continue  300 feet and take a left on Solyanoy Pereulok and follow approximately 700 feet or 3/4's of the city block. The museum is on the left. 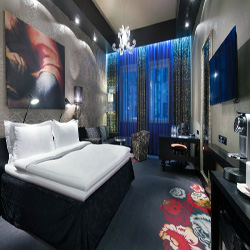 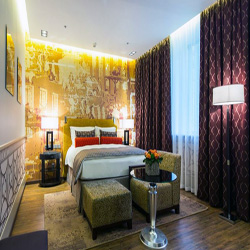 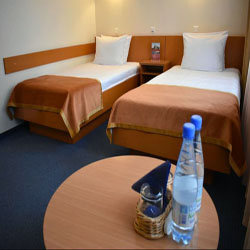