The Tovstonogov Bolshoi Drama Theatre is one of the first in post-revolutionary Soviet Russia.

In 1918, at the beginning of the newly-formed Soviet Union, she became Commissar of Theatres and Public Shows in Petrograd and formed the Special Drama Company or Osobaya Drammaticheskaya Truppa.

After merging the Theatre of Tragedy led by Yury Yuryev with the Theatre of Art Drama directed by Andrey Laventyev, the first year of productions were performed at the Great Hall of the Petrograd Conservatory. In 1919, the theater moved to the building formerly known as the Maly Imperial Drama Theatre at 65 Fontanka Embankment, which is now home to the Bolshoi Drama Theatre.

In 1932, the theater was renamed Gorky Bolshoi Drama Theatre in honor of Maxim Gorky, but in the years that followed, directors frequently changed, performance quality diminished and  patrons lost interest.

The theater was in crisis until 1956, when director Gregory Tovstonogov took leadership of the Bolshoi Academic Theatre of Drama, reintroducing Fyodor Dostoevsky's The Insulted and the Humiliated and The Idiot.

Considered one of the best directors in Europe, Tovstonogov returned the Bolshoi to greatness and in 1992, three years after his death, the building was renamed the Tovstonogov Bolshoi Drama Theatre. By 2015, it was renovated and since 2013, award-winning artistic director Andrey Moguchy has been at the helm.

a look inside the bolshoi drama theatre

Interested to visit the Bolshoi Drama Theatre? If so, click on the links below or scroll down the page to learn more.

More About the Theatre

more about the theatre

Today The Tovstonogov Bolshoi Drama Theatre it's frequently referred to as the Bolshoi Drama Theatre or BDT. Famous for drama and ballet performances in St. Petersburg and abroad, it's renown for its beautiful production of Swan Lake, which is praised as simply perfect. Theater-goers agree there's nothing like seeing an exquisite Russian ballet in a majestic theater steeped in Russian history.

Erected on the Fontanka River embankment the BDT is open throughout the year with performances that are well worth seeing. However, the best ballet productions are offered between May and September.

Visitors say that the seats are a bit lacking in padding but the dancing and sets are fantastic. So, if you go we're sure you will spend a wonderful evening watching one of the famous Russian Ballets shows.

Under Gorky's direction, Andreyeva, fellow writer Alexander Blok and Anatoly Lunarcharsky, the People's Commissar of Enlightenment, were the inspiration for the theater's  development of the new Soviet stage dramas, operas and ballets. On February 15, 1919, the theater doors opened to the premier of its first performance of Shiller's Don Carlos.

In the first years, the theater enjoyed success for many classical romantic productions, to include Othello, King Lear, Twelfth Night, Ruy Bias and the Robbers. Acclaim was also given to the back drop decorations created by famous Soviet artists Dobuzhinsky, Benoit and Schuko, which enhanced the performances of the main actors Yury Yuryev and Nikolay Monakhov.

You can purchase tickets online through the teathre official website and at the box office of the theatre, or through its partners.

The Tovstonogov Bolshoi Theatre is located on the bank of the Fontanka River only a short distance from Nevsky Prospekt and Sennaya Square. It can be reached on foot in 10-15 minutes from Nevsky Prospekt or in 5 minutes from Sennaya Square, where nearby Sennaya Ploschad subway station is located. Should you be staying in a hotel at a distance, it is recommended that you take a taxi.

Personal Note: For more information on the time and type of shows please see the calendar events on the website.

Our picking list of Hotels nearby The Tovstonogov Bolshoi Drama Theatre 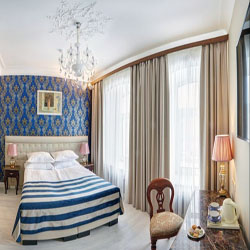 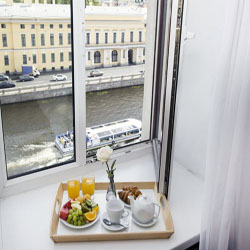 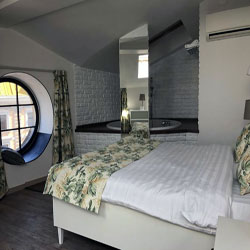 Our picking list of essential travel for your trip to Russia