the museum of political
history of russia
A PARADISE FOR THE HISTORY BUFF!

The museum of political history of Russia is home to a vast interesting collection, spanning from Lenin to Stalin, through Khrushchev and Gorbachev, right up to Yeltsin and Putin.

Northwest of the heart of St. Petersburg, just over the Troitskiy Bridge and the Neva River, lies The State Museum of Political History of Russia. Standing tall with pride, the building has only recently acquired its long and prestigious name. Until 1991, it was known simply as the State Museum of Revolution.

Originally designed by Alexander von Gogen and completed in 1906, this unique building was constructed out of ornate metals, brick, and granite. Built for the Mariinsky Theatre's prima ballerina, Mathilda Kshesinskaya, mistress of Tsar Nicholas II before he inherited the throne, the mansion's design and layout reflects an art nouveau style uncommon in St. Petersburg.

A tour inside the museum will give you a taste of the rich and complicated history of Russia.

Memorabilia from key Soviet figures were shipped and kept preserved in the building - everything from documents, posters, and pamphlets, to information on politicians, scientists, leaders, and heroes, including Tsar Nicholas II, Yuri Gagarin and items of importance on contemporary leaders, such as Mikhail Gorbachev, and much more are currently displayed at The State Museum of Political History of Russia.

Not only do visitors describe the building and interior as beautiful and intricately designed, but they also find the exhibits impressive and often, overwhelming. Behind these doors is a vast collection of political history that chronicles Russia's journey through the best and worst of times.

If you have an interest in 19th and 20th-century Russian/USSR history, this museum will be interesting and educational as it presents a well full coverage of the 20th century turmoil in Russia.☺

a look inside the museum of political
history of russia

Interested to visit the Museum of Political History of Russia? If so, click on the links below or scroll down the page to learn more.

More About the Museum

more about the museum

After the collapse of the Soviet Union, the building was renamed and numerous exhibits were reestablished to give a more thorough and honest view of the U.S.S.R. As a result, many well-hidden details were revealed.

Now, The State Museum of Political History of Russia offers exhibits from Catherine the Great to Vladimir Putin, with upwards of 500,000 items on display. Documents of special interest include a decree from Napoleon, a piece of the Berlin Wall, correspondence by Gorbachev and the video camera he used during the 1991 August Putsch.

Inside the museum you can see the following exhibitions:

For your information, most large info panels are in both Russian and English, then smaller artifact groups have small English booklets in wall holders.

You should know that prior to the Revolution of 1917, the Bolsheviks seized the property. The majority of the plans and activities for overthrowing the Tsar were concocted and set in motion within these walls and when Vladimir Lenin arrived in the city, he made one of his historic speeches from the balcony. After using the building for a variety of governmental purposes, in 1957, it was named the State Museum of Revolution to showcase the Soviet's version of events.

Over an extended period of time, the Soviets had been storing artifacts from the past through the years of their regime regarding the nation's political turmoil. For this reason, today the museum has become one of the best places in Saint Petersburg to learn the history of Russia through the last few centuries.

Exit Gorkovskaya Subway Station on the east side and walk toward Kamennoostrovsky Avenue. Take the stairs down to the tunnel that provides underground passage across the street to Kronverkskiy Prospekt. Exit heading south on Kronverkskiy and continue straight for approximately 1200 feet until you reach Kuybysheva Ulitsa.

The State Museum of Political History is on the left at the corner of Kuybysheva Ulitsa and Kronverkskiy Prospekt.

If you plan to visit the museum on your own we recommend that you buy the audio guides. Currently, there is a choice of two audio guides available. Each audio guide covers two parts of the museum. The first gives you a general overview of the museum, while the second is a bit more in-depth. It's probably worth just getting both, even if you don't get through it all. 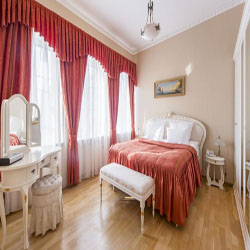 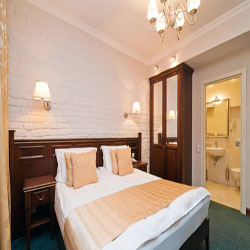 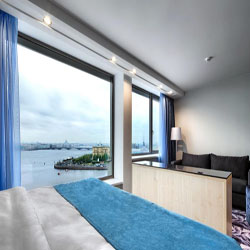