The Bronze Horseman is a tribute to the founder of St. Petersburg, Peter the Great, and immortalized in one of the epic poems by Russia's famous literary writer Alexander Pushkin.

Appropriately placed in the company of The Admiralty, St. Issac's Cathedral and buildings that once held the Senate and Synod of Imperial Russia, this impressive statue symbolizes Peter's reformatory valor and determination to lead Russia forward as his steed rears up to trample the treasonous snake that represents Peter's enemies.

Mounted on the Thunder Stone, an enormous chunk of red granite and the largest rock ever moved by humans, the sculpture appears to be heroically poised on a cliff looking out over the Neva River, as if to defy the approach of all foes.

The monument was erected in 1781 and was formally inaugurated before a huge crow in August 1782. Today it has become the main symbol of the imperial city.

Located in the heart of St. Petersburg, visitors say The Bronze Horseman reflects the pride of the Imperial capital and the well-deserved acknowledgment of Peter the Great's remarkable accomplishments as the architect of St. Petersburg and Tsar of the Russian Empire.

As part of the walking tour, it's worth taking a few moments to admire this tribute to Peter and perhaps, witness the local newlywed tradition of taking photos beside the statue on their joyous day.

a BETTER LOOK AT the bronze horseman

More About the Monument

more about the monument

Created by renown French sculptor, Etienne Maurice Falconet at the request of Catherine the Great, it took 12 years (from 1770 to 1782) to melt and cast the molten bronze, form the pedestal and sculpt the horse and rider.

Falconet's young protégé, 18-year old Marie-Anne Collet, skillfully crafted the face of the Tsar. However, the installation of the monument was directed and completed by Yury Velten, which replaced Falconet, who in 1781, after yet another unsuccessful casting attempt, left Russia in despair.

A German princess by birth with no legitimate claim to a Russian throne taken by coup d'état, it is said that Empress Catherine not only ordered construction of the memorial, she sought to link her name with the ancestral line of Russian Monarchs and founder of St. Petersburg by way of her chosen inscription.

Written in Latin and Russian, it reads: Petro Primo Catharina Secunda – To Peter the First from Catherine the Second.

According to legend, no enemy can take the city of St. Petersburg as long as The Bronze Horseman remains its guardian standing proudly in the city center. This treasured folklore was validated in WWII when citizens protected the statue with sand bags and a wooden shelter and it survived intact and undamaged through the brutal Siege of Leningrad.

The design for the monument approved by Catherine the Great, had its origins with Leonardo da Vinci, who produced the first known model of a rider on a rearing horse.

No admission tickets to buy as this is just a Russian monument.

how to get here

Located at the southern end of the Senate Square between the Admiralty Embankment and  Admiralteyskiy Prospekt. Adjacent to St. Issac's Square and the Palace Square, the monument is easily accessed as part of the city's walking tour. 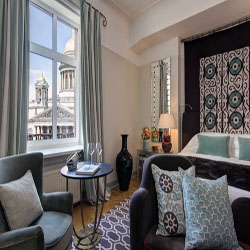 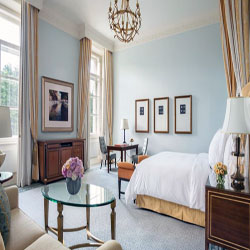