the Vorontsov Palace
ONE OF THE MOST CATCHY PALACES
IN SAINT PETERSBURG, RUSSIA

The Vorontsov Palace is not open to the public and has never played a big role in Russian history, but it can surely catch your attention when walking around the city.

In the heart of St. Petersburg, directly across from the Gostiny Dvor department store on Sadovaya Ulitsa, the Vorontsov Palace stands boldly behind manicured gardens and the ornate scrolls of a striking wrought iron fence.

Although not open to the public, the palace's stunning architectural design is favored by Russian citizens who hold the timeless works of Francesco Bartolomeo Rastrelli in high regard.

The palace was built for Prince Illarionovich Vorontsov, Empress Elizabeth's chancellor and maternal relative. However, history says that Vorontsov became distressed by the expense of the palace so he gifted this beautiful baroque style Palace to the Knights of Malta following Napoleon's surprise capture of the Mediterranean island stronghold.

Years later Emperor Paul I, commissioned Italian architect Giacomo Quarenghi to upgrade the palace and by 1800, The Maltese Chapel or Maltese Capella was built for the exiled French aristocrats residing in St. Petersburg at the turn of the century. At the beginning of 1810, the palace became home to a series of exclusive military schools, which included the Page Corps (1810-1918) and the Suvorov Military School (1955-present).

In 2003, The Maltese Chapel was extensively renovated and, with its unique acoustics that supports the rich notes of the pipe organ, it is currently used for recitals. On occasion, classical concerts are performed in the Capella chamber hall and ticket sales are available to the public; giving patrons an opportunity for a rare peek into the grand Vorontsov Palace.

A LOOK INSIDE THE VORONTSOV PALACE

Interested in going to the Vorontsov Palace? If so, click on the links below or scroll down the page to learn more.

The palace was built between 1749 and 1757 by Francesco Bartolomeo Rastrelli for Count Mikhail Illarionovich Vorontsov, a distinguished diplomat, and statesman during Empress Elizabeth Petrovna's reign. The palace has 50 rooms and it took 8 years to be built.

Inside the palace, visitors may see the Museum of the History of the Cadet Corps of Russia  and The Maltese Capella. However, as I already told this fascinating and imposing palace is currently closed to the public so the entrace is very limited both inside and outside.

It is interesting to know that following Elizabeth's death in 1762, Vorontsov became distressed by the expense of the palace, as well as a scandal involving his niece, Elizaveta Vorontsov's relationship with Emperor Peter III.

During the same time, Peter's wife Catherine orchestrated the notorious coup that deposed Peter and gave her the throne as Empress Catherine the Great. In that turbulent year, Vorontsov was also expelled from the royal court and forced to sell his palace to the crown.

Because of Prince Vorontsov's distress, he gifted the Vorontsov Palace to the Knights of Malta following Napoleon's surprise capture of the Mediterranean island stronghold. Also called the Knights of Hospitaller, Paul was chosen to be the new Grand Master by a contingent of knights who took shelter in St. Petersburg after it was learned the previous Grand Master had failed to anticipate the serious threat Napoleon posed to Malta.

The palace is not open to the public so there are no tickets on sale.

The royal palace is located on Sadovaya Ulitsa near the Gostiny Dvor shopping arcade in the very centre of St. Petersburg. If you stay anywhere in the famous Nevsky Avenue you can get there on foot. Public transportation are also available.

The stunning Vorontsov Palace, outbuildings and vast gardens are not open for public viewing. However, if you are keen to get inside the Palace your only chance would be to attend a musical performance at the Capella Chamber, when there is one.

Our picking list of Hotels nearby the Vorontsov Palace 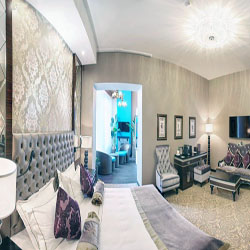 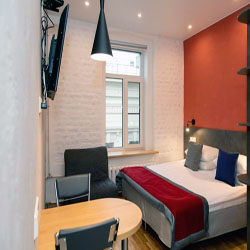 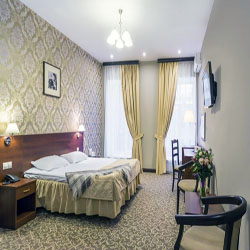