the prince vladimir cathedral
one of the city's oldest churches

The Prince Vladimir Cathedral is an attractive, gleaming white, five-domed church worth stopping by.

Located in an area of the earliest settlement in St. Petersburg, the construction of the Cathedral began in 1708. The plans for this  Russian Orthodox cathedral were initiated by Empress Anna Ioannovna to replace the existing wooden church, but it wasn't until 1766, in the time of Catherine the Great, that work began under architect Antonio Rinaldi. Following a fire in 1772, it was again, left unfinished, but Ivan Starov stepped in and finally, in 1789, this stately baroque, neoclassical beauty was consecrated.

To date, it has survived unaltered, even during the dark years of the Siege of Leningrad when it remained a working church, as well as a sanctuary for many of St. Petersburg's religious treasures.

From 1941-2001, The Kazan Icon of the Mother of God was kept here and returned to The Kazan Cathedral in 2001. Like many other churches, the interior was ransacked during the Soviet Revolution, yet in spite of the upheaval, it was only closed between 1926 and 1927.

The Prince Vladimir Cathedral is located in the Petrogradskaya District by the Sportivnaya Metro Station near the bridge that crosses the Neva River to Vasilevsky Island. This cozy, quiet welcoming house of worship is a 10-minute walk to The Peter and Paul Fortress and an ideal place to reflect on Russia's Christian foundations.

a look inside the prince vladimir cathedral

Interested to visit the Cathedral? If so, click on the links below or scroll down the page to learn more.

more about the cathedral

Also known as St. Vladimir's Cathedral and The Cathedral of St. Prince Vladimir Equal-to-the-Apostles, this church's namesake is founded in the chronicles of Vladimir the Great, the Prince of Novgorod, Grand Prince of Kiev and ruler of Kievan Russia from 980 to 1015.

Born in 958 to Prince Sviatoslav of the Rurik Dynasty, Vladimir was originally a follower of Slavic paganism. By 980, he had expanded the Kievan kingdom with territories known today as Belarus, Russia and the Ukraine and fortified his domain against tribes in the region. Impactful events during his early rule set him on a course to explore various religions and in 988 AD, he chose to convert to Christianity.

During his reign as a Christian, Prince Vladimir lived the bible's teachings by acts of charity. He gave food and drink to the poor, founded churches and schools and established ecclesiastical courts. His work was based on helping his neighbors by sharing their burdens and as a result, Prince Vladimir became a great peacemaker credited with bringing Christianity to Russia. For this reason, the church was named after him!

You should know that the Prince Vladimir Cathedral has never been closed, and during War World II was the most important spiritual stronghold for people in the besieged city.

There are a number of interesting relics in the Cathedral, including a beautiful, jewel-clad Berlin Bible from 1689, a gift to Empress Elizabeth, images of the Four Evangelists and other historic icons. The Cathedral is active, so open to the public with daily services and a great choir.

There is no entry fee as this is an active orthodox Russian church.

You can get there by taking the Metro. When you arrive at the Metro Station Sportivnaya, just exit the station and walk to the end of the underpass and take the stairs. The cathedral is located on the right and is approximately a three minute walk. Taxis can be also a good alternative to the Metro to reach the place.

Open: Daily from 8 am to the end of services

Our pricking list of Hotels nearby the Prince Vladimir Cathedral 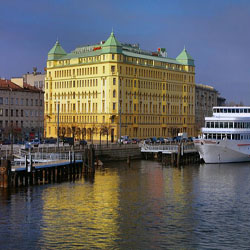 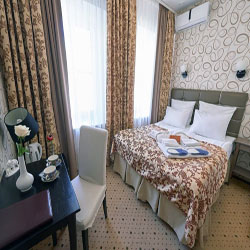 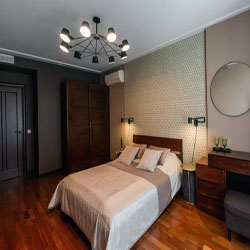