St Petersburg Economy
The City of Growing Economy in Russia

The St Petersburg economy has grown quickly since the end of Soviet times and it has become a leader in terms of economic growth in the country.

Awarded first place for minimal investment risk in 2006, and more recently, for high effectiveness of regional administration, St. Petersburg, and indeed Moscow and the whole of Russia today is economically and politically stable. This is regardless of the ongoing tough sanctions imposed by the West, which in our humble opinion are an open and direct economic war on Russia. 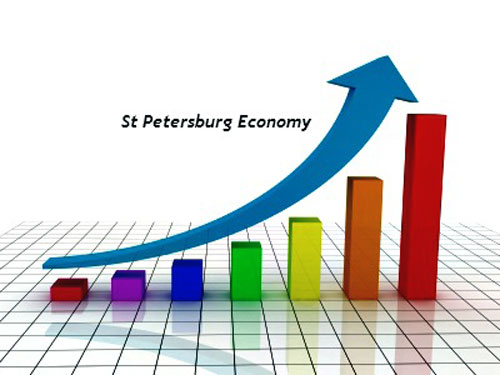 As one of the most important tourist and cultural centers in the whole Russian Federation, tourism play a key role in the economy of St. Petersburg as well as industrial production. The city is an important trade gateway and an industrial and financial center of Russia, and generally speaking, the Russian economy of the North-West Federal District is considered the fifth largest in the country.

To give you a quick overview, the leading industries which are employing over 20% of the city’s eligible workforce, are mechanical engineering, metallurgy, and the food industry (headed by the production of beverages). The main leading investor countries are France, the USA, Belarus, South Korea, Brazil, China, and Belgium.

However, for many years the city’s manufacturing industries have remained far greater tax contributors than the other sectors of the Russian economy, providing about 25% of tax revenues to the imperial city annually, with foreign investment of 90%.

During 2011, St Petersburg economy was showing stable and diversified development with growth rates varying in different economic sectors. In fact, the residential stock increased by 2.70 billion square meters or 44 737 apartments.

Stabilization of the financial sector contributed to the acceleration of residential construction and the annual growth reached up to 1.9%, much better than the previous year. As a result of that, in 2011, included  2012 and 2013 the GRP exceeded the pre-crisis level and reached 13.7%.

Furthermore, based on the Committee for Economic Development and the Industrial and Trade Policy, in 2011, 2012,  and 2013, the Industrial Production Index reached 113.8%. The highest growth was registered in the shipping volumes of the manufacturing industry (130.9%), company revenues (121.2%), and wholesale volumes (110.8%).

As a result of this high growth, there was also an increase in nominal wages and several investments to improve the city's infrastructures. Combined with a decline in officially registered unemployment, this indicates that labor markets are stabilizing.

Today, the car production sector in the city is still the second biggest in Russia (after the Privolzhsky region) with major international companies such as Toyota, General Motors, Hyundai, and Nissan located in the suburbs of the city. The city is also the best tourist center in north-western Europe.

Foreign investments across all Russia are still going on, and new major infrastructure projects have been completed, such as the Pulkovo airport, the motorway to Finland or Moscow, and more. And we have also heard that there are plans to invest more in the tourism sector, build new properties and make local products more competitive abroad and, who knows, maybe even more.

st petersburg economy is good, but what about russian economy in general?
There you go...

According to the Federal State Statistics Agency (Rosstat), in the second quarter of 2013 the Russian economy grew by a healthy 4%, but it was down from a GDP growth of 4.9% registered in the first quarter of 2013.

Instead, from 2014 up to today, things have turned out not very well because of the sanctions, although a growing internal market like food is stabilizing itself and bringing new opportunities to the locals. In addition to that, the COVID-19 brought up huge problems to the Russian economy, which are more or less the same problems as those you can find in other countries in the world. However, Russia managed to recover and now is focusing on stability.

That said, if you would like to know more about the St Petersburg economy, we think that the St. Petersburg International Economic Forum, held each year at the end of June, is the right place to go for getting the latest update on global and Russian economic new news. Also, we recommend checking Wikipedia and the Russian institute for urban economics.