The Dostoevsky Museum is the same apartment where the famous Russian author lived and worked.

Named after the world-famous Russian novelist, writer, essayist, journalist and philosopher, Fyodor Mikhailovich Dostoevsky, the F. M. Dostoevsky Literary Memorial Museum is located in the building and residential apartment where Dostoevsky once lived.

Based on the memoirs of his wife and close friends, this historical apartment has been identically reconstructed to reflect the way it was when Dostoevsky resided there in 1846, and again, from 1878 until his death on February 9, 1881.

It is here that Dostoevsky wrote some of his most acclaimed literary works, many of which explore human psychology and the tumultuous social, political and religious themes of the times. His most celebrated works include Crime and Punishment (1866); The Idiot (1869); Demons (1872); and The Brothers Karamazov (1880), plus, he produced countless other novels and short stories that distinguished him as one of the world's greatest literary writers.

At the Dostoevsky Museum, visitors can travel back in time to an era of beautiful literature and reflect on the private quarters once occupied by a man whose destiny was to become one of Russia's most deeply profound and influential writers of all time. The apartment itself is preserved as it was when Dostoevsky died there, with quite a lot of the personal items.

Whether you are a fan of Dostoevsky's books or not, it doesn't matter! This is a very special place to visit in Saint Petersburg for anyone keen to get an inspiring glimpse into the Russian literature landscape of the time and the giant Russian writer's life.☺

a look inside the dostoevsky museum

Interested to visit the Dostoevsky Museum? If so, click on the links below or scroll down the page to learn more.

More About the Museum

more about the museum

The Dostoevsky Museum has gathered an extensive collection of items in tribute to Fyodor Dostoesky and offers four main sections that commerate his life. 1) The Writer's Memorial Apartment; 2) The Exhibit Halls, featuring photographs and art; 3) The Literary Exhibition, which showcases his work and biography; and 4) The Theatre.

A tour inside the apartment will take you through the following exhibits:

For your information, it wasn't until the collapse of the Soviet Union that the F. M. Dostoevsky Literary Memorial Museum opened on November 12, 1971 - 90 years after his death.

You should know that Dostoevsky struggled to make ends meet. In his early days as a writer, he aligned himself with a supportive socialist community and was accused of political conspiracy. He was arrested in 1849 under Tzar Nicholas I, sentenced to death and jailed in The Peter and Paul Fortress. At the last minute, Nicholas stayed his death sentence and instead, Dostoevsky served four years of hard labor and exile in Siberia, followed by required military service.

Upon his release, Dostoevsky continued his writings through two marriages, extensive travels and his ongoing battle with poor health. With works grounded in Christian values and political ideologies, the Soviet's firmly disagreed with Dostoevsky's stance on politics and religion and deemed his writings unacceptable in accordance with socialist communist ideology.

It is interesting to know that every November, scholars come together from around the globe for the Dostoevsky and the World Culture Conference held for the academic study and appreciation of his literary works. Also, a festival initiated by the Committee of Culture with more than 50 events that celebrate Fyodor Dostoevsky at museums, theaters and libraries city wide. Held on the first Saturday of July since 2010, a time which represents the beginning of his novel Crime and Punishment.

Fans of Dostoevsky's writings say the museum is fantastic and they couldn't get enough!☺

You can buy tickets at the ticket office inside the building of the museum.

The museum is a bit hard to locate as the entrance is down six steps from the corner of the road - and while there are signs on the door - the sign at eye level is just in Russian. To get there you can walk or take the public transportation such as the Metro, Tram, or Bus.

Accessibility note: Not suitable for wheelchair-bound and motion-impaired visitors (no elevator/lift)

Our picking list of Hotels nearby the Dostoevsky Museum 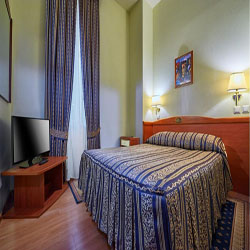 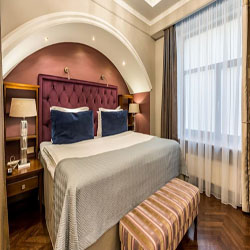 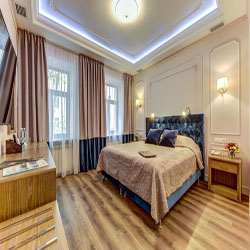 From Dostoevsky Museum return to Attractions or go to the Homepage