the menshikov palace
One of the oldest buildings in the city

The Menshikov Palace is a branch of the Hermitage Museum since 1981 hosting a wonderful collection of Russian art of the late 17th-early 18th century.

Set on an embankment overlooking the beautiful Neva River on Vasileyevskiy Island, The Menshikov Palace is not only St. Petersburg's first stone building, it is the only private residence to survive intact since the 18th century.

The interior has also been thoughtfully preserved with original décor, furnishings, rare works of art, sculptures and personal items belonging to Alexander Menshikov, the first owner. But it is Menshikov's back story that provides an intriguing view of the palace and the early Imperial era.

Built 1710-1714, by architects Ludwig Fontana, Johann Gottfried Schädel, Domenico Trezzini, Bartolomeo Rastrelli and Jean-Baptiste LeBlond, the merging of Russian and baroque style made Menshikov's new manor the most chic residence of its time, even over the Emperor's smaller palace.

Tsar Peter preferred holding official functions with foreign ambassadors, gala events and formal balls there. It was in The Menshikov Palace that the Imperial court was formed and the center of political, cultural and social life in St. Petersburg was established.

Rooms exhibiting colorful Dutch tile, rich tapestries, fine portraits and Alexander's personal office speak to his refined, yet sensible taste. Often described as an aristocratic estate that feels more like a home than the grandiose palaces of the Tsars, The Menshikov Palace is a monument to the incredible rise and tragic fall of titled nobility.

a look inside the menshikov palace

The land where The Menshikov Palace was built was given by Peter the Great as a gift to Saint Petersburg Governor General Alexander Menshikov, which was his favorite friend and associate.

The building has a clear simple layout. The vaulted rooms on the ground floor are paved with black and white tiles. The main staircase leads to the first floor that contains suites of staterooms and the personal apartments of Menshikov and his wife.

A tour inside the Palace will take you to the Great Hall of the first floor, the
Vavara's Chamber and the Walnut Office of Menshikov (rare wood with brass and tortoise- shell), plus you will enjoy great views and an interesting Russian art collection.

During your visit, you will be able to learn how the nobility lived at the beginning of the 18th Century. If you go, don't expect the splendors of the palaces of the tsars, don't expect major works of art but expect to see how a very rich general lived at the time.

Born of humble beginnings, as a boy, Menshikov sold pies on the streets of Moscow and though not of noble birth, was the closest companion of young Peter Alexeyevich, the future Tsar of Russia, Peter the Great. Combining his talent for administration and Peter's vision for Russia, Menshikov rose to a prosperous career in Peter's court. Given title of Field Marshall and governor of St. Petersburg, by Peter's death in 1725, Menshikov was the second-most powerful official in the Russian Empire.

You should also know that Menshikov's propensity for corruption was his downfall and after Empress Catherine I became fatally ill, his enemies succeeded in turning the royal family against him. Menshikov's property was confiscated and he and his family were exiled to Siberia where he died in 1729.

The palace was transformed into the First Cadet Corps in 1727, serving as a most prestigious high school educating Russia's finest statesmen and military leaders. A museum devoted to the school was founded in the 1880s and following restoration, the palace opened under the auspices of the Hermitage Museum in 1981.

Tickets to Menshikov Palace can be bought at the ticket office of the State Hermitage Museum because the Palace is just a branch of the Hermitage. Please note that you can buy tickets only during opening hours. Alternatively, you can also purchase your ticket online through the Hermitage museum official website (see link below).

This part of The Hermitage Museum (same ticket) can be reached on the number 1, 10 or 11 Tramway. It's a long walk from the Hermitage via Dvortsovy Bridge, especially if it's cold or rainy. If you are staying in the famous avenue Nevsky Prospekt you can easily reach the Palace on foot or take the Trolley or Bus.

Admission: Adults: 300 Rubles; For students and children is free. Free admission to all visitors on the first Thursday of each month.

Photo and Video: Not allowed

Accessibility note: Sorry, this museum is not wheelchair accessible.

Our picking list of Hotels nearby the Menshikov Palace 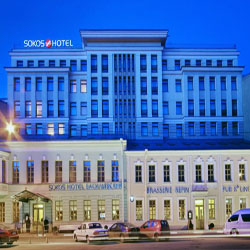 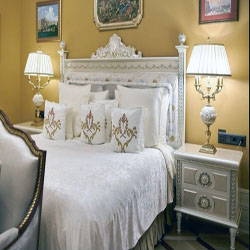 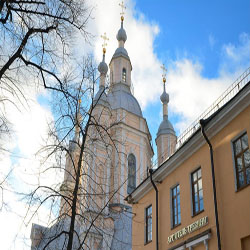