The imperial estates near St Petersburg's suburbs are worth visiting for anyone interested to discover the impressive wealth and assets of the Russian Tsars.

A visit to Russia's Northern Capital is not complete without a trip to the most famous and spectacular Imperial Estates Near St Petersburg. Never mind if you have only 2, 3, or 5 days, you should really take time to explore the city suburbs, where you can witnessing the wealth and tastes of the Emperors of Russia from Peter the Great to Catherine the Great and beyond.

All the royal palaces and parks and gardens located in St Petersburg's outskirts are charming and interesting places to explore any time of the year, though going in the summer would be better. If you plan a day trip to any of the Tsar's summer residences you're sure to enjoy a relaxing stroll across sumptuous palaces and extensive landscaped gardens while absorbing a treasury of art, beauty, and Russian history you have never seen before.

Certainly, Tsarskoe Selo or Peterhof are among the best of the world famous royal residences to see. Surely you've heard of them from TV or travel magazines, so no introduction is needed. But apart from them, there are also Pavlovsk, Gatchina, or Oranienbaum: three amazing hidden gems off the beaten track that boast unique attractions and charms as much as the famous ones.

To reach these Imperial estates near St Petersburg, which more or less are situated 30/40Km away from the city, you're better off going by car. Of course, you can also take the bus or train, or even go by boat if your destination is Peterhof only, but practically speaking, we would recommend hiring a car with a driver to get there. By booking a chauffeur service you are sure to save time and nerves, plus you will be traveling safely and in comfort.☺

Below you can find a list of the most famous Imperial Estates Near St Petersburg. Learn more about each of them and let your imagination be inspired by the greatness of the former Russian Tsars. We hope our list will help you to decide which one to add to your sightseeing list. 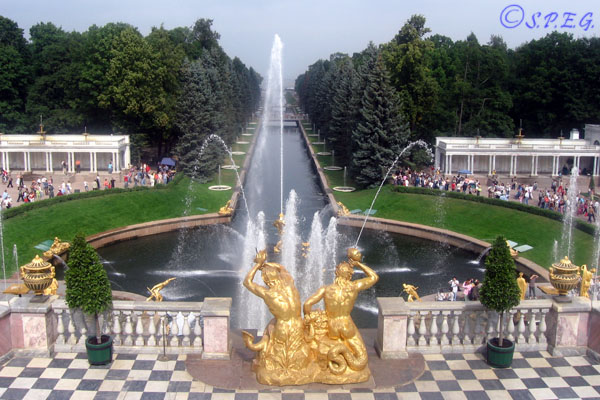 The Grand Cascade of Peterhof

Often referred to as the "Russian Versailles", Peterhof is Russia's number one tourist attraction thanks to the stunning Grand Palace and its royal parks and gardens set next to the palace.

Built between 1709 and 1724 under the directions of Peter the Great, Peterhof has parks with a total area of 1,000 hectares, five grand imperial palaces, dozens of fountains, thousands of works of painting, sculpture and applied art.

It remained one of the most important ensembles in the St. Petersburg suburbs, retaining its significance and brilliance even when European monarchies went into crisis and decline. The focal point of the whole Tsar's summer residence is the jaw-dropping cascade fountain leading down from the palace and from there the park spreads out to the left and right along with a range of trick fountains all lined up. 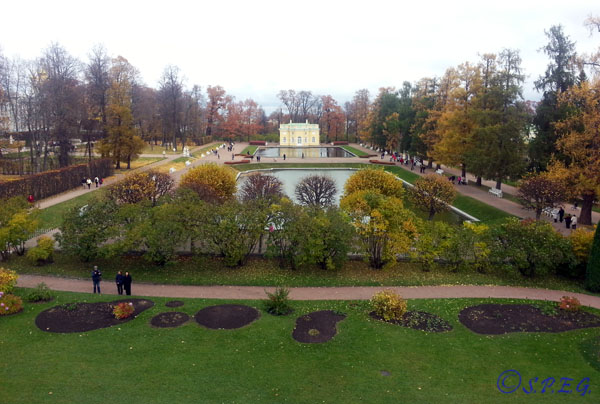 The town of Tsarskoye Selo, also known as "Pushkin" in honor of the great Russian poet Alexander Pushkin, is home to Catherine Palace and its beautiful park and gardens complex.

The Catherine Palace with its sparkling amber room and its park complex filled with unusual monuments and lakes are a gem of 18th-century architecture and the second most famous summer residence of the Russian Tsars.

Here anyone can admire the luxury and excesses of the Russian Emperors! Next, to the remarkable Catherine Palace, you can find the quieter Alexander Palace where the last Tsar and his family spent their final days before they were arrested by the Bolsheviks and the literary school museum where the poet Pushkin studied. 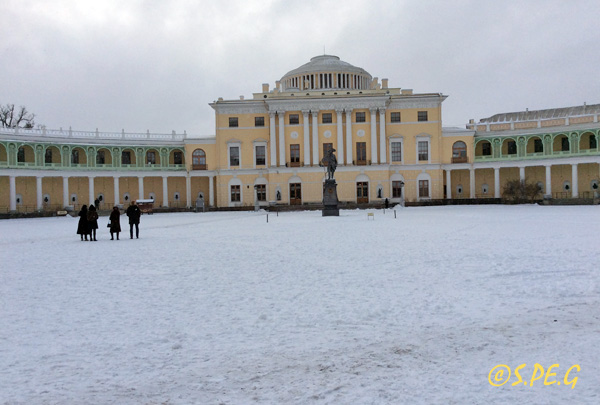 The Pavlovsk Palace in winter

Pavlovsk is one the most tranquil and relaxing Imperial estates near St Petersburg, as well as one of the finest landscaped gardens in Europe. Situated 5 kilometers to the south of Tsarskoye Selo, in a picturesque spot, this small Russian village hosts the fascinating Pavlovsk Palace (a superb building), and a huge park ensemble (about 1,500 acres). The whole royal ensemble dates from the late 18th to the 19th century.

Tall trees, winding streams and endless paths scattered with classical sculptors and sided by benches make for many Russians, but also for visitors like you, the best place to go for a picnic or a stroll with family and kids, especially during the summer when it's warm and sunny. Surely not as imposing as Peterhof, but less touristy, Pavlovsk can be a great place to get away from the hustle and bustle of city life and admire the vast wealth of the Russian tsars. 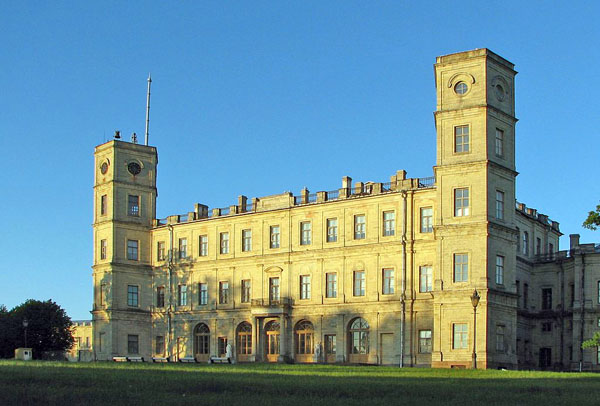 North View of the Gatchina Palace

Far less touristy than other Imperial estates near St Petersburg, there is Gatchina, a Russian town located 45 kilometers southwest of the city that boasts the beautiful Gatchina Palace.

Gatchina, a busy small town with an austere look of a military institution, can make for a very pleasant half-day trip for the whole family.

The palace along with the park, which once was home to the Romanov family, is not so luxurious as the royal palaces in Pushkin or Peterhof but is home to a variety of interesting temporary and permanent exhibitions, including a weaponry display, and a church at the top of Gatchina's main pedestrian mall. You should know that Gatchina's palace was badly damaged during the Nazi occupation, and restoration work is still continuing over 60 years later. 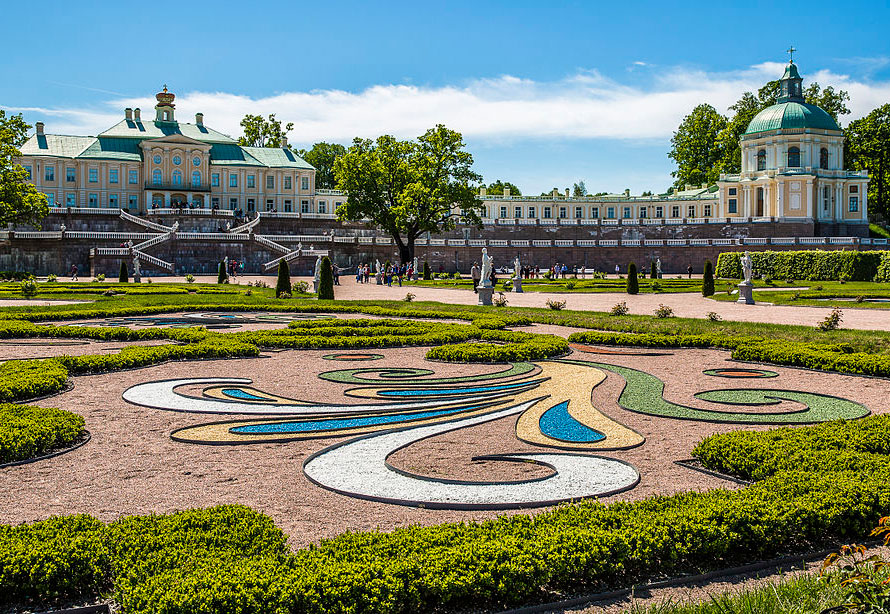 The Grand Menshikov Palace in Oranienbaum

Oranienbaum is another great place to see but less popular among tourists. It boasts a charming park and a truly magnificent baroque palace and is one of the oldest Imperial estates near St Petersburg that wasn't destroyed by the Nazis. It was the only Tsar residence in the environs of the imperial city that was not under Nazi occupation during the war. The Great Menshikov Palace is one of the most opulent examples of Petrine architecture and the main attraction to see.

Oranienbaum, also known as Lomonosov, is worth visiting not only for the remarkable grand palace and the large natural landscape park but also for its vast history.