oranienbaum
A Hidden Gem on the outskirts
of Saint Petersburg

Oranienbaum is another wonderful suburb of the Northern Capital, the town of Lomonosov, which isn't popular among tourists.

Located in Lomonsov, a suburban district 40 kilometers west of St. Petersburg on the gulf shores, you can find Oranienbaum, an imperial estate on the suburbs of the city less known compared to other imperial estates nearby, but definitely worthwhile visiting. 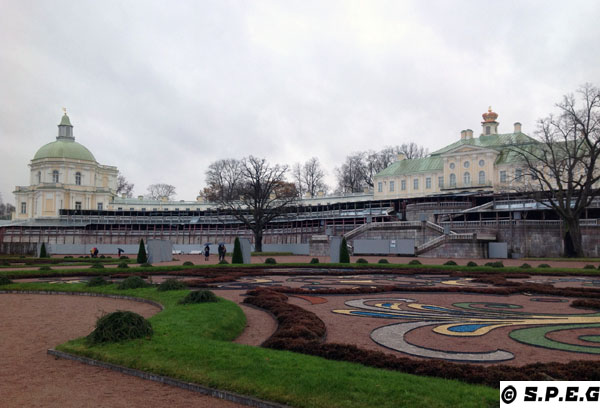 According to legend, the name Oranienbaum (German for an orange tree) was given to this grand estate by Peter the Great, following the Northern War, when a greenhouse full of trees and signs describing their species was discovered on the grounds. Peter liked the name, which is how Oranienbaum's title and coat of arms depicting a tree with orange fruit came to be.

Visitors going for a trip to Oranienbaum can tour the oldest of the Imperial palaces of St. Petersburg and the only one not seized by Nazi Germany during WWII, The Grand Menshikov Palace, a charming yellow and white building that has a rich history and reputation for having no equal to its size and beauty. Having survived centuries without maintenance, restoration is ongoing, as this striking palace stands out majestically alongside Peterhof, in the northern capital by the sea.

Also, anyone can enjoy the large and beautiful park, which is a lovely place for a picnic or a walk through peaceful gardens, stunning pavilions, and pine woods. And, if like us you like to go biking, then renting a bike is a great way to get around the palace and park surroundings, as cycling is allowed.☺

For your information, the park's dense forest is well-kept, but far more natural compared to other parks of royal descent. Many find the contrast appealing and prefer the organic landscape with its charming canals, stone bridges, tranquil ponds, and impressive sculptures, all of which are nostalgic landmarks of the regal Imperial era.

a look inside oranienbaum

Interested to visit the Palace and Park? If so, click on the links below or scroll down the page to learn more.

The Grand Menshikov Palace is one of the Russian baroque architectural wonders of the middle 18th century, and one of the oldest royal building in Oranienbaum. The Palace and the park ensemble along with the city of Oranienbaum are UNESCO World Heritage Sites. 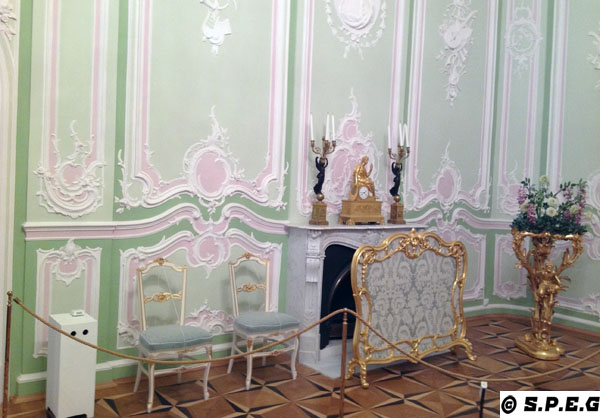 A Look Inside the Grand Menshikov Palace

Undoubtedly, West European and Russian traditions of architecture blend together perfectly in this wonderful building, which was built by Alexander Menshikov with the help of the architects Giovanni Fontana, Gotfrid Shedel, Domenico Trezzini, and Bartolomeo Rastrelli.

A guided tour of the palace will take you through the The Japanese Pavilion (where you can admire 200 items of Japanese and Chinese porcelains), The Palace Chapel or Court Church (which was served as both a court and a parish church for two centuries), The Ladies Wing, The Kitchen Wing, and the impressive original Peterstadt Fortress.

Just a few footsteps outside from the Menshikov Palace you can also visit Peter III's Palace (a small pleasure building on the property where Peter spent leisure time with his closest entourage and the place where he abdicated the throne in 1762); The Private Cottage and The Chinese Palace (a main building of the Private Cottage with stunning walls decorated in gold molding, covered in silk and embroidered with jewels); and the Museum Picture House (a small building used for court theater, a library and offices to Peter III's extensive private art collection).

In addition to that, visitors to the museum can descend a secret spiral staircase from the emperor's private chambers to the area of the fortress. Personal items worn by Peter III can be seen here. In particular, a 3-cornered hat, scarf, and uniform. Highly recommended!☺

The Oranienbaum park complex is considered by locals one of the most beautiful parks in the outskirts of Saint Petersburg. Huge, clean, and diverse, the park is well maintained, and part of it it is still under restoration. 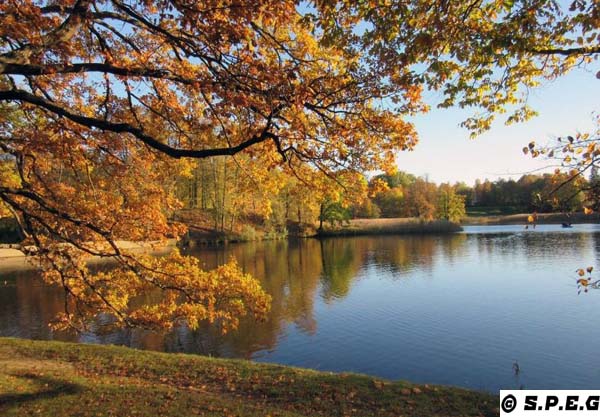 The park can be split into two parts: the Upper Park (This is the southwest of the palace, known as the most beautiful section of the park to date. It is dense woodlands dotted with canals, bridges, waterfalls, and ponds); and The Lower Park (The Formal gardens that were fashionable during the times are located here near the palace. To date, they have not been restored to their original form).

In between you can see the Katalnaya Gorka Pavilion (Rollercoaster Pavilion or Sliding Hill Pavilion), the Stone Hall (a Separate building on the grounds used for concerts, dances, and masquerades), and the Cavalier's Room, which hosts a small cafe, and much more.

Overall, we believe that the park is another wonderful place, if not the best, to get away from the hustle and bustle of the imperial city, and enjoy a day out with your family or friends surrounded by the beauty of a natural landscape.☺

The history of the Grand Palace dates back to the early 18th century when Peter the Great gifted the property to his closest adviser, Alexander Danilovich Menshikov, who built his summer palace there.

In 1727, after Menshikov was arrested and exiled, it was acquired by the state and used as a naval hospital until 1743, when it was returned to the Imperial family. Empress Elizabeth Petrovna commissioned Francesco Rastrelli to remodel it and gave the estate to Grand Duke, Peter Fedorovitch, the future Emperor known as Peter III.

Peter hired Antonio Rinaldi to build a small two-story structure on the estate and named it Peter III's Palace. This was where he spent his carefree leisure time with associates and a place that reflected his passion for the military.

In 1762, it was also where Peter abdicated the throne to his wife, Catherine II, who had successfully orchestrated a coup against him. Once Empress, Catherine made Oranienbaum her summer residence and built her “Private Cottage,” with its prized Chinese Palace, which remained intact and retains original features from the time of her reign.

Initially there were wooden statues in the garden that were coloured in marble style, and
the Chinese Palace was previously called “Holland Palace”.

You can purchase tickets at the ticket office located inside the building upon your arrival. Tickets online are currently not available, and in the event you find them, you must exchange these e-tickets into the real tickets at the entrance.

Please note that there's no option to visit the Grand Palace on your own, cause the visits are only by groups with the guide and the path is watching is pressing as the rooms are not very spacious and while entering one you wait the other group to quit and then to enter the other.

You can get from St. Petersburg to Oranienbaum by train, bus, car, or minibus.

If you go by train you must leave from Baltisky (Baltic) Station in St. Petersburg, travel around 2-Stations, and then take an easy walk from the train station to the Grand Menshikov Palace.

If you go by bus, from Avtovo Metro Station take bus N. 200 or marshrutka N. 300 or N. 424A (direction Lomonosov, 40mins). You can also take the minibus K-343 from Metro Station Prospect Veteranov.

If you choose to drive by yourself (not recommended) take Peterhof Highway through Strelna and Peterhof. Personally speaking, the best way to get there is by hiring a car with a driver. This way, you travel in safety and stress-free.

INFO ABOUT THE GRAND MENSHIKOV PALACE

This magnificent baroque palace was originally built for Peter the Great's closest adviser, and was the only suburban royal palace to survive World War 2.

INFO ABOUT THE ORANIENBAUM PARK

This nice landscaped park is slowly being restored to its former glories, and contains a number of unusual architectural features.

Open: Daily, 9 am to 8 pm.
Admission: Rubles 200.00 (Ticketed admission: May to October 9am to 5pm in Saturday, Sunday and public holidays)
Accessibility note: Wheelchair access to the park

INFO ABOUT THE CHINESE PALACE

This small neoclassical villa was the favorite retreat of Catherine the Great. It has been superbly restored with interiors in "Oriental" style.

INFO ABOUT THE PALACE OF PETER III

This modest two-storey building was built for the future Peter III, and was the centre of Petershtadt, his peculiar model fortress of which he styled himself the Commandant.

INFO ABOUT THE STONE HALL

Built as part of a Summer Palace for Peter III, this simple two-storey block by Antonio Rinaldi was later used as a Lutheran church, and is now an exhibition and concert hall.

The Oranienbaum is one of the smaller palaces around St. Petersburg and is a good place to make a half day trip if you've already been to Tsarskoye selo or Peterhof. For your information, visitors often see both attractions on the same day since they are only 12 kilometers apart. Minibus K-348 connects the two estates. 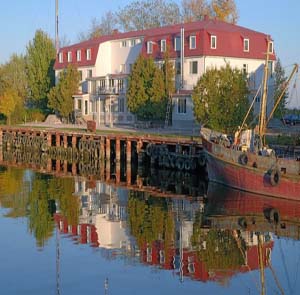 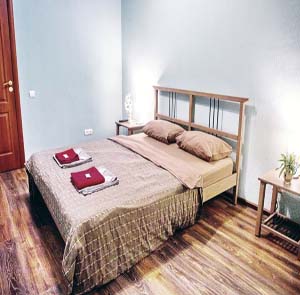 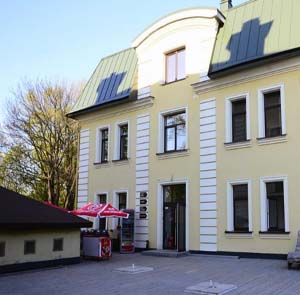 Our picking list of essentials travel resources for your trip to Russia.