Bridges in Saint Petersburg
A Russian City Surrounded by Bridges

There are countless of bridges in Saint Petersburg. Some of them can remind you those you've seen in Venice or Amsterdam; others will be unique as the city itself.

Nicknamed as the "Venice of the North", St Petersburg is not only famous internationally for its Hermitage, Royal Palaces, Museums, Rivers and Canals, but also for its varied beautiful bridges that spread across the city.

In fact, you should know that Russia's Northern Capital has over 300 bridges of various styles, sizes and materials that may amaze you: narrow or broad, wide or long, stone or cast-iron, hanging or flap.

Designed by prominent architects and engineers from Russia, Italy, France, Germany and elsewhere, many of these bridges were built to span the numerous canals that thread through this “City of Bridges”, as it is also sometimes called.

Today, all of the bridges in Saint Petersburg are a vital part of the city's infrastructure and have become important tourist attractions. But for many Russians, they have always been an excuse for all night wandering and festivities.

The bridges are a symbol of the thaw and awaking from a long winter. Most people look forward to welcoming the Summer in St Petersburg, so it arrives many want to go out, have fun and enjoy the long and broad daylight.

The popular White Nights Festival is a great example of that, and surely the best time for you to come and have fun as well. Regardless of the various celebrations, watching the bridges in Saint Petersburg rise during the white nights is an incredible experience you can do from May to September. So make sure you don't miss it!☺

Since there are 342 bridges in Saint Petersburg, we've made a list of only those that are well-known and considered historically important. We've split them into the main city's waterways. Check out our selection below!

To get started just click on the links below.

Bridges on the Neva River

Bridges on the Fontanka River

Bridge on the Malaya Neva River

Bridges on the Moyka River

Bridges on the Griboedov Canal

Bridge on the Winter Canal

Tip: A visit to the city of Peter the Great is not complete without seeing some of the most famous bridges in Saint Petersburg. Of the 342 bridges in the city, several of them are technical and beautiful masterpieces. Among them we have The Palace Bridge, Anichkov Bridge, Lomonosov Bridge, The Bank Bridge, and Trinity Bridge. All of these bridges are worth a stop or a picture, whether you are walking around the city or taking a river cruise.

I am sure that many of these bridges will remind you of Venice!☺

BRIDGES ON THE NEVA RIVER 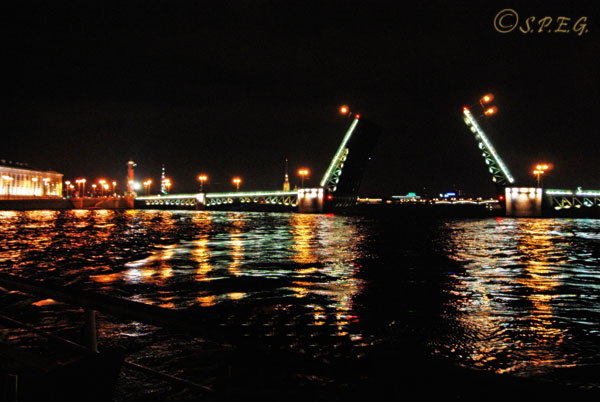 The Palace Bridge at Night

The Palace Bridge, one of the most famous bridges in Saint Petersburg, is often featured on postcards, calendars and in films because it is positioned between the Winter Palace and the Spit of Vasilevsky Island, two popular sights. Built by a French firm and opened in 1916, the bridge is regularly used by locals as it serves as a road traffic and foot bridge, but it is also often visited by visitors, especially during the Summer nights. 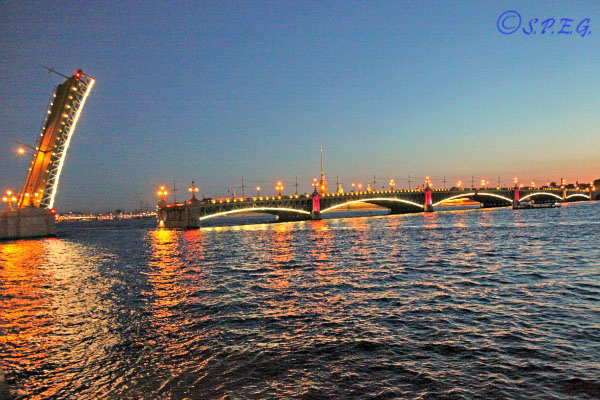 Thanks to its notable Art Nouveau design, the Trinity  Bridge (Troitsky) is one of the most beautiful bridges in Saint Petersburg. With a width of 582 meters, it is also the second longest bridge in the city as well as the busiest. Opened in 1903 as part of the celebrations of St. Petersburg's 200th anniversary, the bridge occupies also a special place among the city's bridges.

Its axis lay along the Pulkovo Meridian (the prime meridian in Russia until Greenwich was internationally recognized). The bridge's name refers to the Trinity Cathedral, which once stood by the river on the Petrograd Side.

Measuring a length of 905.7 meters and a width of 35 meters, Alexander Nevsky Bridge is the longest bridge in the city. It was designed by different architects and then built from 1960 to 1965 to connect the right-bank area of Saint Petersburg to the city center. Restored in 2000, the bridge was open again to traffic in 2003 with a new bright art illumination and an extra 12 km of steel ropes. 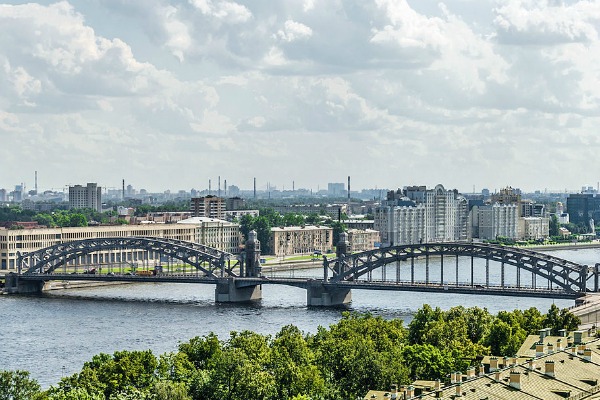 The Peter the Great Bridge

Instantly recognizable thanks to the swooping arched girders of its two side spans, the lamps and the four granite Norman Towers that mark the corners of the third small central span, the Peter the Great Bridge, also known as Bolsheokhtinsky bridge, is one of the most impressive bridges in Saint Petersburg.

Measuring over 300 meters long and 23.5 meters wide, this bridge has an innovative mechanism that allows the narrow (14.6-meter) central span to be raised in only 30 seconds since it was open to the traffic in 1911.

BRIDGES ON THE FONTANKA RIVER 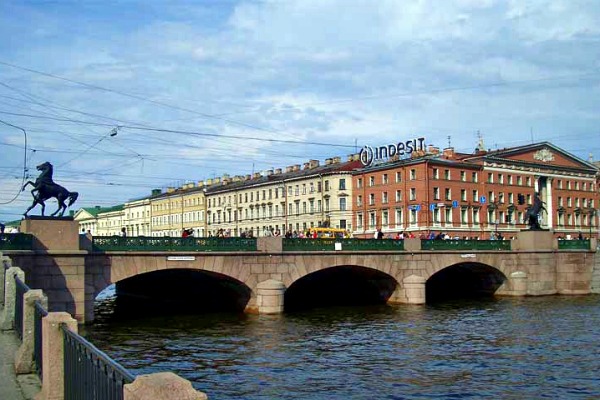 With its stunning four rearing horses standing on each corner on the bridge and spectacular views of the surrounding palaces, the Anichkov Bridge, built on Nevsky Prospekt over the Fontanka River, is one of the architectural highlights of Nevsky Prospekt, and essential viewing for any visitor to St. Petersburg.

Named after Mikhail Anichkov, the engineer who designed the first bridge on this site, the current construction has stood since its inauguration in 1842, while today it is among the most bustling bridges in Saint Petersburg as it is situated in the heart of the city. 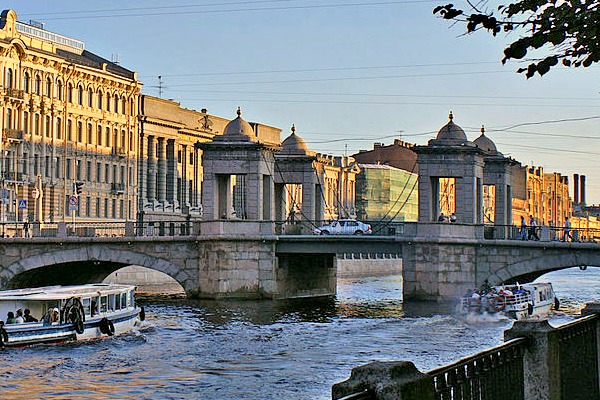 Lomonosov Bridge is one of the best preserved bridges in Saint Petersburg across the Fontanka River. Formerly known as Chernishev Bridge in honour of General Chernishev, years later it was given a new name in memory of the Russian polymath, scientist and writer Mikhail Lomonosov.

With its four granite towers topped with cupolas, round ball-like golden urns and metal railings, this bridge may not be very large, but it is certainly very picturesque and worth a visit, especially for its four charming Doric pavilions, which once housed the drawbridge mechanism as the bridge in the past was used to rises to allow passing traffic. 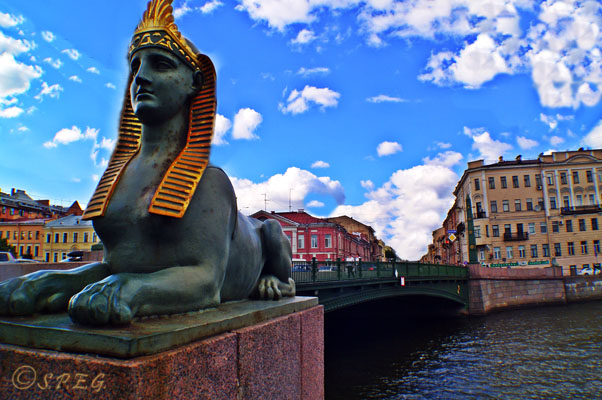 Located on Lermontovsky Prospekt across the Fontanka River, the Egyptian Bridge was St Petersburg's first metal bridge and the only one in the city to be decorated in Egyptian style. With its two fine bronze cast iron Sphinxes, you feel like you have entered an Egyptian temple when you walk across the bridge because of the big obelisks on both sides and the stylized Sphinxes on the corner.

BRIDGE ON THE MALAYA NEVA RIVER 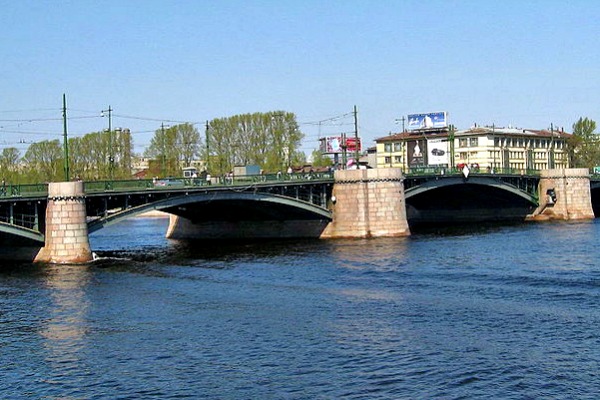 Crossing the Malaya Neva River and connecting Vasilievsky Island to Petrograd Side, the Exchange Bridge is one of the most famous bridges in Saint Petersburg because of its nautical decorations made of granite and cast iron. Named after the old St Petersburg Stock Exchange Building, it was built in the late 18th century to facilitate communication and transportation with other city's islands.

BRIDGES ON THE MOIKA RIVER 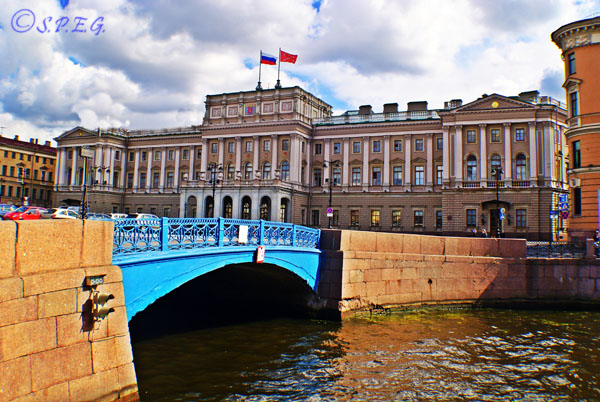 Situated in front of the Mariinsky Palace just beside Isaac's Square on the Moika River, the Blue Bridge is considered the widest bridge in the city: 97.3 meters wide and 32.5 meters long. One of the most intriguing and nicest bridges in the city, this painted bridge designed by the architect William Heste in 1818, is easily unnoticed. 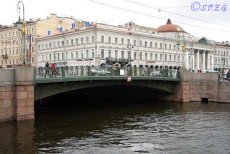 Spanning across the Moika River and situated on the corner of the popular Nevsky Prospekt, the Green Bridge was the first cast iron bridge in the city to be built and the only one to undergo several reconstructions since its founding. In 1730, the wooden bridge was painted green and later earned its name. Subsequently, it was renamed Police Bridge after the Police headquarters located nearby.

Today, with its original street lamps, it serves as an important crossing for walkers, cars and public transport on the famous Nevsky Prospekt. 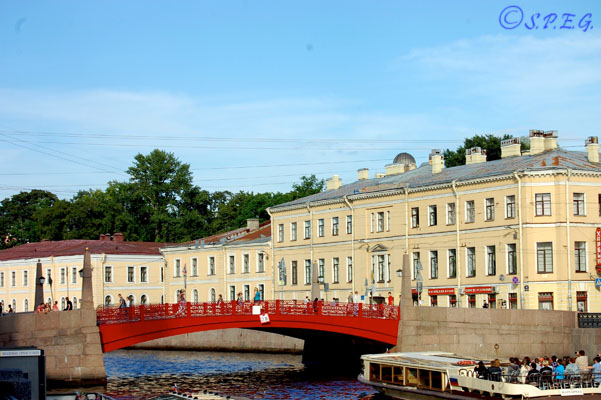 The Red Bridge is a one-bay arched bridge 22 meters long and 16 meters wide crossing the Moika River at Gorokhovaia Street. Meant to be one of the four surviving colour coded bridges in St Petersburg, the Red Bridge has a superb view of the Admiralty and Alexander Gardens.

First built as a wooden drawbridge in 1717 and then rebuilt in 1814 in cast iron, but without changing the bridge's outer appearance, the Red Bridge got its name from the colour of its sides facing the river, as per the other coloured St Petersburg bridges. 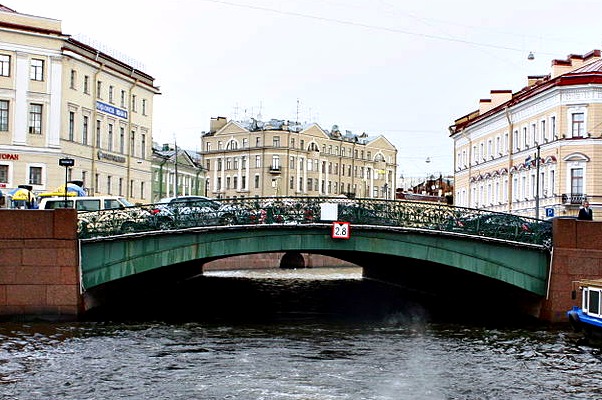 Designed by the French architect Auguste de Montferrand in 1834, Pevchesky Bridge is the third-widest bridge in the city, after the Blue Bridge and Kazansky Bridge. Known as the Yellow Bridge for the colour of the cast iron railings, a few years later it became Pevchesky Bridge because of the Palace Chapel Choir located nearby. History says that Nicholas I was the first person who walked across the bridge. 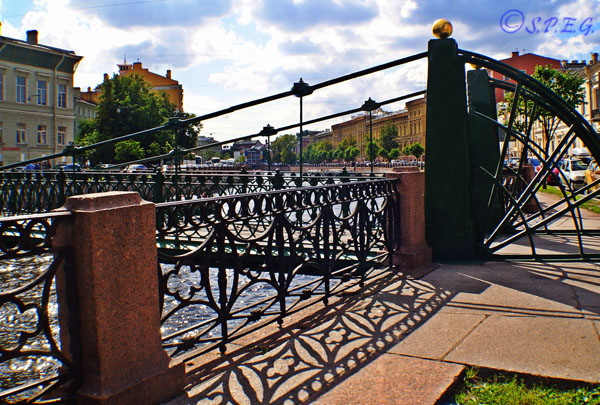 Named after St. Petersburg's Central Post Office - "Pochtamt" - the Pochtamtsky Bridge is a footbridge built in 1824 across the Moika River based on the designs of two architects: Wilhelm von Traitteur and Chrstianovich. Today there are only three other pedestrian bridges in St. Petersburg left: the popular Lions Bridge and Bank Bridge on Griboedov Canal.

BRIDGES ON THE GRIBOEDOV CANAL 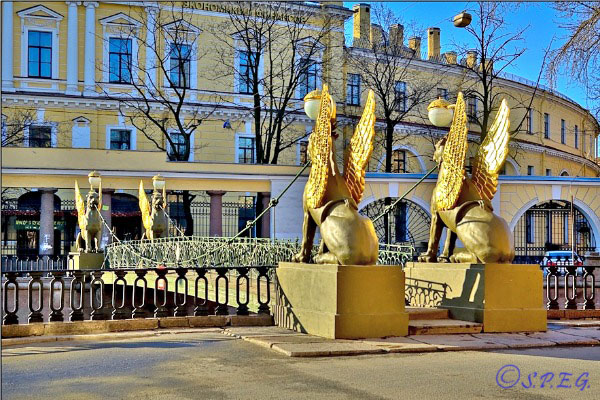 The Bank Bridge is definitely one of the most beautiful pedestrian bridges in St Petersburg. You will certainly be impressed by the finely decorated griffons with golden wheels standing on both sides of the bridge. Located on the Griboedov Canal, not too far from Nevsky Prospekt or Kazan Cathedral, the bridge was named after the former bank building, one of Russia's first public banks. 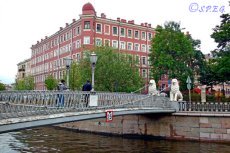 Crossing the Griboedov Canal, not far from the Mariinsky Theatre, you can find the small pedestrian Lions Bridge, one of St Petersburg's most celebrated landmarks and a popular spot for taking photos. Designed by German engineer Wilhelm Von Treitteur and opened in 1826, the bridge took its name from the crowned, cast iron sculptures of four white lions. 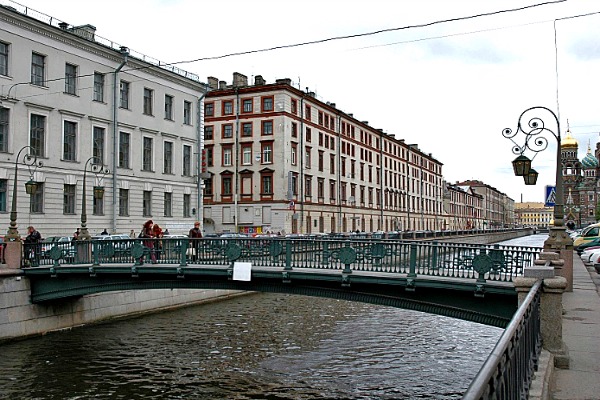 The Italian Bridge, which crosses the Griboedov Canal, is an another popular footbridge for locals and tourists located just a few minutes away from the splendid and famous Church of the Savior on Spilled Blood. Rebuilt several times since its founding in 1896, the bridge measures a length of 19.66 meters and a width of 3 meters.

BRIDGE ON THE WINTER CANAL 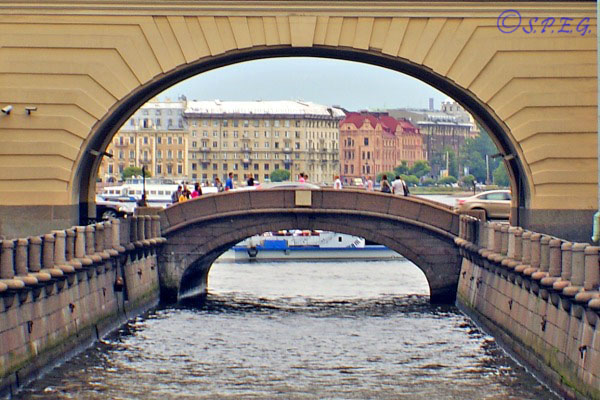 The Hermitage Bridge crosses the little Winter Canal, which moves into the Neva River right next to the New Hermitage, is the oldest and smallest stone bridge in the city as well as one of the most pictured in postcards. Built in 1720 from brick and limestone with a granite exterior by Herman van Boles, today this historical bridge is part of the Hermitage and Winter Palace district.

You should know that some of the bridges in Saint Petersburg during the Summer time rise in the middle of the night to allow passing traffic along the large Neva River. Although, they are an important part of the St Petersburg Attractions, this can cause some problems for people, both locals and tourists, who are out late – leaving them aground on the islands that make up St. Petersburg until a bridge is lowered.

So, whether you're planning to go out at night in the city or you just want to know what time one of the above drawbridges rises, I would suggest that you check the official St. Petersburg Bridge Schedules before you leave your hotel or apartment.

Checking out the night bridge schedules can save you an unpleasant setback or help you plan a visit on your own!

Would you like to see one of these bridges listed on this page open up at night?

If so, Send a Tour Request Today!☺