Learning about St Petersburg city layout will help you better plan your visit and understand more about how the city has been designed since Peter the Great put the first stone back in 1703.

Dubbed as the "The most artificial city in the world" by F. Dostoyevsky and "A window to Europe" by A. Pushkin, the St Petersburg city layout has developed gradually as the architectural trends and concepts of the city landscape have changed. 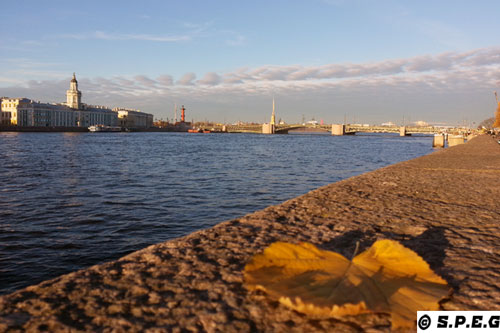 The Palace Bridge Connecting Admiralty side to Vasilievsky Island.

Built upon 100 islands on the Neva River, with more than 60 rivers and canals, the city of St Petersburg has been historically and logically split into four main areas which are in no particular order: Admiralty side, Vasilyevsky Island, Petrograd side, and Vyborg side.

As you understand, Saint Petersburg Russia was built on the water because of its proximity to the Gulf of Finland. The city is well connected with each side by several bridges and underground subways, so getting around the city is not difficult. Of course, if you think you can walk everywhere you are mistaken! The city is flat but big and public transportation or a  car is highly recommended to explore different sides of the city.

To help you navigate around St. Petersburg we recommend taking a FREE map upon your arrival at the Pulkovo Airport, just look for the tourist information desk, or you can ask a map at your Hotel, or you can get one at the city tourist office information on Sadovaya Street near the bustling central Nevsky Prospekt or between the famous Winter Palace and Palace Square.

Being that said let's now get into the content of the St Petersburg city layout!

Below you can find a short introduction to the most important areas/zones of the city of St. Petersburg so that you can better understand the urban architecture of the city. To get started, just click on the links below or scroll down the page. Happy reading!

This is considered the city center where much of St. Petersburg's historical and cultural heritage is concentrated, including many amenities tourist-friendly.

Admiralty side is considered the most central, active, and bustling part of St. Petersburg Russia. This area is full of stunning architectural monuments and buildings from the late 18th-19th centuries and offers interesting things to do and see both day and night. 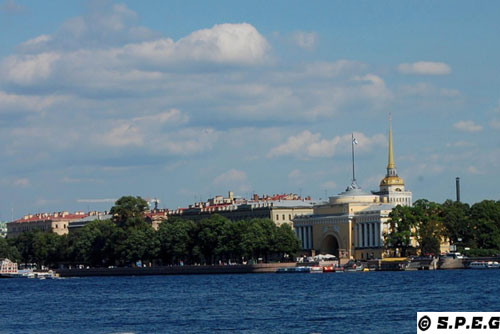 Located between the Neva River in the north and the Obvodny Canal in the south, and crossed by the Fontanka and Moika rivers, Admiralty is home to many interesting museums,  historical royal palaces, as well as its numerous amenities such as cafeterias, restaurants, hotels, shops, malls, and nightclubs.

This side of the city includes many top attractions such as the famous Hermitage Museum, the Kazan Cathedral, Summer Garden, the Church on the Spilt Blood, St Isaac's Cathedral, Russian Museum, Alexander Nevsky Lavra, including the main avenue of the city, Nevsky Prospekt.

For visitors, Admiralty is the perfect place to stay during your visit to the imperial city because here you can go sightseeing, shopping, eating out, and have fun; here is all reachable on walking distance or a few stops by bus or the subway. If you're looking for a hotel or a flat to stay, Admiralty is really the right spot to start your Russian holiday, so if you are looking for accommodation don't look elsewhere.

This part of the city offers a beautiful view over the Winter Palace and Peter and Paul Fortress and is home to a few interesting sites but not as much as the Admiralty.

Vasilievsky Island, located between the Bolshaya Neva and the river’s other arm, is the largest island in the city. Considered the center of the city's academic life, this area of the city is not as busy as Admiralty. 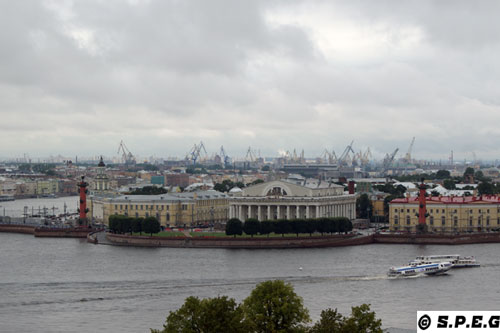 Here, is where you will dock if you travel to St Petersburg on a cruise ship or by ferry. An important seaport has been situated here since the 1730s, the seaport is known today as the Marine Facade port terminal in Vasilievsky Island.

Apart from the most important seaport of the city, here you can also find a few stunning landmarks and sights to see. So this island shouldn't be underestimated but honestly speaking, we don't recommend finding accommodation in this area as it won't be comfortable for a tourist.

That being said, you should know that this area was supposed to be the administrative and cultural center of the city, which was developed in the 19th century. Due to the lack of access (the first bridge was built in 1850) and the risk of floods and stormy crossings, Vasilievsky Island became a middle-class haven.

Today, the island features stunning broad tree-lined avenues, examples of attractive classicism architecture, and several Lutheran churches. It is also home to the famous St. Petersburg State University, various institutes, libraries, and a few museums, which have been established here in the former warehouses and customs buildings. The Kunstkamera Museum, the Zoological Museum, or the Naval Museum are just a few of them.

As we write early, on the island you won't find many options for drinking or eating out like in the city center (the Admiralty) but you can enjoy the best views of St. Petersburg. In fact, if you walk from the Palace Bridge to the right, you can reach the famous Spit of Vasilievsky Island with its two famous Rostral columns. From there you can enjoy an amazing view of the Hermitage Museum, Marble Palace, Summer Garden, and the Peter and Paul Fortress.

If you are visiting Vasilievsky Island don't miss the fascinating Menshikov Palace. And, if you start to feel hungry, go to the Seventh Line near Vasileostrovskaya metro station. There, you will find a beautiful, long pedestrian avenue full of cafeterias, restaurants, and a few sushi bars.

This is the first part of the city to be erected back in 1703 where you can find residential homes and several smaller universities, including the stadium of FC Zenit.

The Petrograd Side is a borough in Saint Petersburg consisting of the islands of the northern part of the Neva delta. On one of these islands, you can find the small Hare Island where it was built the famous Peter and Paul Fortress. History says that Peter the Great (the first Russian tsar) laid the foundation of the Peter and Paul Fortress to protect the mainland and to secure Russia's outlet to the sea. 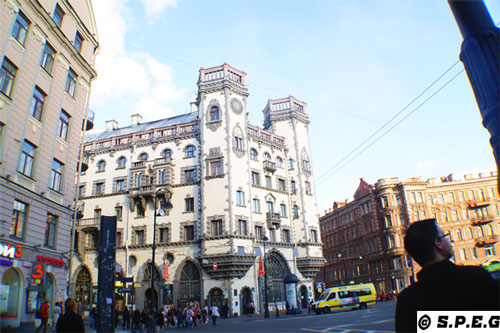 Located in the northwestern part of the city, Petrograd was home to several regiments of the St. Petersburg garrison, while today is home to old but nice residential areas and stores, including the Bolshoy Prospekt, the second major thoroughfare of the Petrograd Island, also known as the second Nevsky Prospekt thanks to the high number of up-market stores and boutiques, including a few restaurants and cafes.

The architecture of the street covers all the fashionable design trends of that period, including style modern, revivalism, and Russian neo-classicism. If you love doing shopping and you would like to see a different area of our city you should definitely come here. To get there you can take the blue line subway and get off at the Petrogradskaya metro station.

Petrograd is also famous among sports fans for the Petrovsky stadium. However, Peter and Paul Fortress, the Museum of Political History of Russia, and the nearby Gorkovskaya park are the main attraction of the region, including the tallest structure in the city, a 326 m high TV tower.

Lastly, you should know that Petrograd hosts a lovely recreational area with many elegant gardens and parks, such as the Botanical Garden, Kirov Central Culture, Leisure Park, and the Maritime Victory Park. So, if during your visit you also fancy a place to enjoy a stroll away from the hustle and bustle of the city, this area is the right place to come.

This is where the city ends and the road to Finland starts. Mostly a residential area for the Russian working class, here you can walk in the biggest park of St Petersburg, see a few war monuments, and many old-style Soviet apartments.

Located on the east of Bolshaya Neva up to the north along the river, there is Vyborg, another borough in Saint Petersburg less known by tourists. This is the industrialized part of the city and the biggest residential area, where the majority of the working class live, including us. 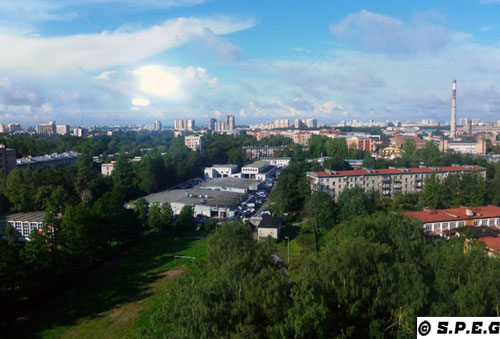 The region is called Vyborg because of the nearby motorway leading to the small Russian town Vyborg near the Finnish border. Once a huge natural area made of trees, rocks, and a few wood house, today a place with local factories, industrial buildings, and gloomy old Soviet-era apartment blocks, including emerging modern residential areas for the young generation of Russians.

You should know that this part of the city holds little appeal for tourists compared to other zones of Saint Petersburg Russia but its contribution to the city's history cannot be disputed. Vyborg's side is the place where Lenin was welcomed back from exile at the Finland Station and subsequently hid out in the quarter before the Bolshevik Revolution in October 1917.

As a tourist, if you go a bit further north in the city, you can find the picturesque St. Sampson's Cathedral and the biggest cemetery in the world, the Piskarovskoe Memorial Cemetery, where 470 000 victims of the Siege of Leningrad were buried.  Furthermore, not too far from the Ploscad' Muzhestva metro station, you can also find the biggest and oldest park in the city, Sosnovka.

During the Second World War, this huge park served as a military airport for the Russian army, while today it serves as a recreational zone for locals living nearby.

If you plan to visit this area of the city you should come here only for taking a stroll or biking in the beautiful park of Sosnovka and to see the Piskaryovskoye Memorial Cemetery but also to get a glimpse of the remaining dissolved Soviet Union and local life.

Apart from the above city's areas, the St Petersburg city layout is also made of two other districts which are often underestimated by most visitors. For example, the southern part and the right bank of the Neva River, which are located on the outskirts of the city and not too far from the famous Peterhof and Tsarskoye Selo (about 35Kms).

For your information, the southern part of the city boasts gorgeous industrial architecture and magnificent Stalinist buildings along with several attractions such as the Monument to the Heroic Defenders of Leningrad, the Narva Triumphal Arch, Chesme Church, and Pulkovo Observatory, just to name a few.

While the right bank of Neva hosts historical gunpowder factories, a few beautiful churches and parks, and the hockey arena Ice Palace, which is also used for concerts, exhibitions, and as a skating rink. These other visited areas of the city are out of the tourist radar and easy to reach by subway or by bus if you don't want to book a taxi or hire a car with a driver.

We hope you have found this page about the St Petersburg city layout helpful.☺